A Portrait of a Man Writing by Candlelight 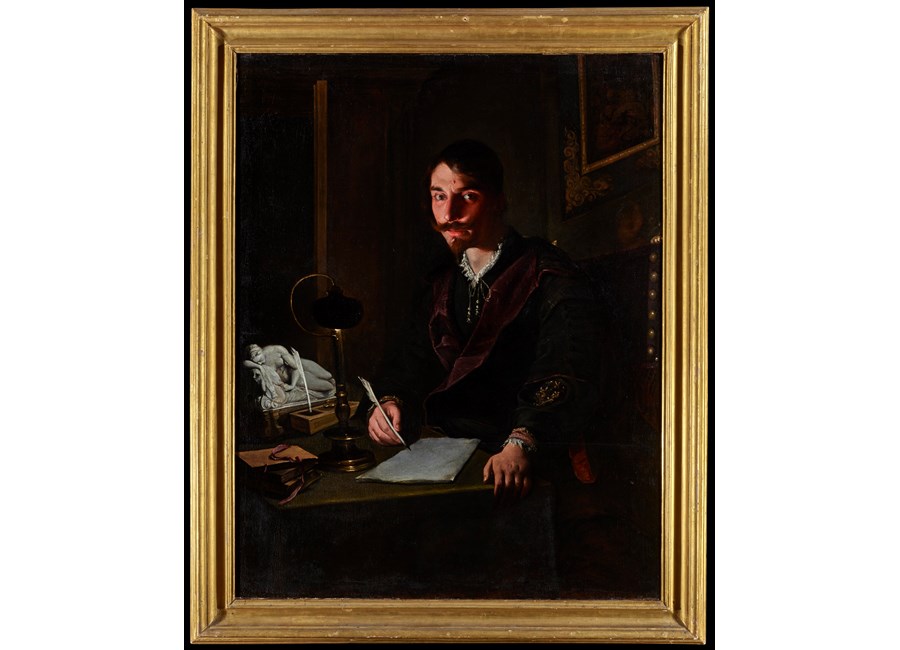 This masterpiece by Pietro Paolini, also known as il Lucchese, dates to the 1630s. Within a dimmed and quiet interior appears a gentleman in slight profile seated at a table, his distinct features and engaging gaze sharply illuminated by a single flame from a nearby candle. Wearing dark and thick fabrics adorned around his wrist and collar with delicate details, he holds a quill above a sheet of paper in his right hand. To his right lies a stack of notebooks, an inkwell, and a small plaster of the Sleeping Venus, a prop that appears in other paintings by Paolini, including his Fabbricante di liuto, formerly in the Mansi Collection (Maccari pp. 130-131, cat. no. 45, reproduced)

This canvas is exemplary in its quality and handling, as particularly visible in Paolini’s mastery of light, in his rendering of the still-life elements, and in his confident understanding of the sitter’s features. Absent here is the element of artifice that sometimes appears in other examples of his work, and fully recognizable is a sense of quiet intimacy and familiarity, two features that also underscore the possibility that this is a self-portrait of the artist. While there is another version of the present composition in the Mazzarosa de’Vicenzi collection in Lucca (Maccari, p. 120, cat. no. 37, reproduced in colour p. 122), the high quality of the present work strongly suggests it to be the prime version, though the two have never been put side by side.

Born in Lucca in 1603, Paolini was sent by his father at the age of sixteen to Rome, where he studied closely with Angelo Caroselli and absorbed the influence of Caravaggio. After a sojourn in Venice, he returned to Lucca in 1631 and established an art academy along with the still-life artist Simone del Tintore, with whom he sometimes collaborated. Visible in this canvas is Paolini's successful blending of the Caravaggesque realism that influenced his early career with his own idiosyncratic emphasis on the physiognomy of his sitters, most often shown in busying themselves in an interior setting with various tasks, including sculpting or playing instruments.

Dr. Nikita de Vernejoul has endorsed the attribution to Paolini after firsthand inspection. Dr. de Vernejoul also considers the present lot to be the prime version of the two.

A Portrait of a Man Writing by Candlelight