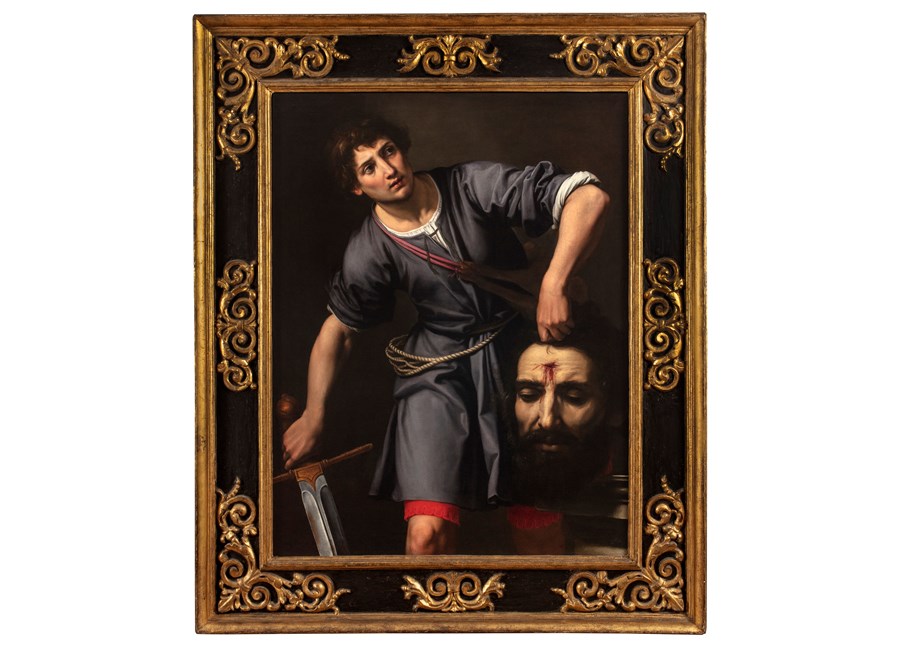 Born in 1585, Ottavio Vannini was apprenticed to Domenico Passignano (1559-1638) in his native city of Florence. With his master’s departure for Rome in 1602, he remained in Passignano’s workshop, now under the direction of Pietro Sorri (1556-1621/22), and in 1605 Vannini executed one of his first commissions by completing the decoration of the Brunaccini Chapel in the church of the Santissima Annunziata, Florence. Shortly thereafter, Vannini probably moved to Rome himself to work as Passignano’s assistant. Returning to Florence in 1616, he was involved in a number of major decorative cycles in his native city for the Medici family, and in 1622-23 he worked alongside Matteo Rosselli at the Villa del Poggio Imperiale, where he decorated the vaults of the Sala di Cosimo II and the Sala di Francesco I in the Casino Mediceo. His most famous commission, however, was the completion of the decoration of the Salone degli Argenti in the Palazzo Pitti, which had been left unfinished by Giovanni di San Giovanni: between 1638 and 1644, he painted a number of the frescoes there, the most famous being Lorenzo the Magnificent among the Florentine Artists. Although Vannini worked extensively for the Medici family, his most important patron was the Florentine Andrea del Rosso (1579-1644), for whome he frescoed the private chapel (now destroyed) at his palace in the Via Chiara and executed at least 14 paintings.

Vannini depicted the subject of David on a number of occasions, including a small David with the Head of Goliath (Florence, Galleria degli Uffizi) and a Triumph of David(St. Petersburg, State Hermitage Museum). A larger version of the Hermitage picture was sold at auction (Tajan, Paris, 30 June 2000, lot 9); the head of the Goliath in both works is identical to that in the present composition. Another Davidis listed in an inventory dated 2 May 1705 of the possessions of Carlo Lorenzo Ughi (1634-1705), resident in Palazzo Ughi on via Larga, Florence: “Un Quadro di braccia 1 ½ , con cornice near e di oro, rapresentante David, opera del Vannino.’ (see G. Corti, ‘La collezione Ughi in Firenze nel 1705’, Paragone, September 1980, p. 73). The dimensions of the Ughi painting (1 ½ bracci is the equivalent of about 34 inches) are somewhat smaller than the picture being offered.

This Davidmay be dated to the end of Vannini’s life, to the early 1640s. Similar facial types to the young hero can be found in the figures of the large fresco of Lorenzo the Magnificent among the Florentine Artists, which was executed between 1638-1644. Stylistically it is also comparable to the powerful Jael and Siserain the Seminario Maggiore, Florence (see Il Seicento Fiorentino, Florence, 1986-1987, pp. 236-237, no. 1.110, illustrated). In both works, the protagonists are set dramatically against a dark background, with sleeves rolled-up and tightly bunched around the elbows. Yet for all the drama implied by the events depicted, there is a sense of restraint evident in the calm, abstracted gazes of the figures and the static, sculptural quality of their poses. Arguably it is the high quality of the draughtmanship that is the most striking and impressive aspect of all three works. This confers on the figures a certain majesty and monumentality, which, in the case of the present work, thoroughly befits the heroic status of David as the young king of Israel.

Dr. Francesca Baldassari for confirmed the attribution to Vannini on the basis of a transparency and a black and white photograph on June 23rd, 2001.