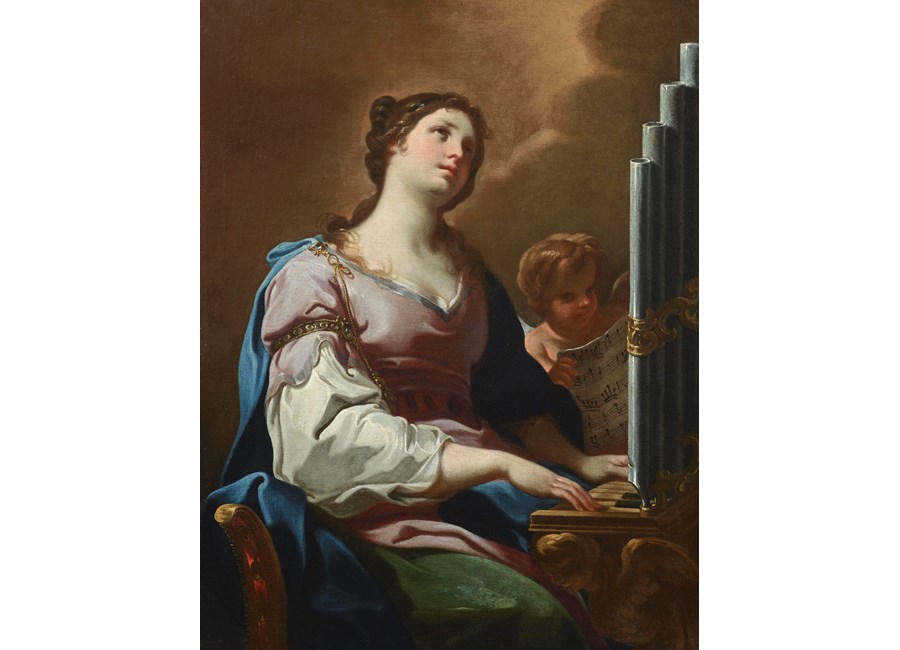 The following catalogue note was prepared by George Hersey for A Taste for Angels: Neapolitan Painting in North American 1650-1750, an exhibition at Yale University Art Gallery, The Ringling Museum of Art and the Nelson Atkins Museum of Art (see Exhibited)

The saint, of soft and ample form, is seated at the organ, fingers idly on the keys, her face suffused with dreamy prayer as if, in accordance with her legend she heard ome higher music in her heart. Around the tall lead organ pipes winds a gilded filigree. The atmosphere is that of a golden cloud. Cecilia wears a salmon-colored dress clasped with jeweled gold on the sleeves, white undersleeves, and a blue mantle tied with golden twine. Her underskirt is moss-green. Behind her holds a sheet of music. A brilliant patch of crimson velvet shimmer on the gold arm of her seat.
The picture is particularly close in style to the Prado’s Justice and Peace. The use of pastel colors – salmon, pale blue, pink, orange – is a noteworthy bond between the pictures, as are the firm, elegant, French-style drawing and clear flesh tonalities. This seems to be another picture from the early 1750s. It is a good specimen of Giaquinto at his most Roman, and particularly analogous to the Circe, a seated, three-quarter-length figure turned to the right from a book of astronomical signs, in the Pinacoteca, Montefortino (D’Orsi 1958, fig. 101), dated by D’Orsi 1751-1752. Both have a sumptuous clarity worthy of Maratta or Sacchi. Bust as with the Chrysler Adoration of the Magi, the figure of Sebastiano Conca comes into play – not as a stylistic mentor but as a source of compositions, for example, in the Boston Sibyl, dating from 1726 – itself derived from Domenichino. The amplitude of flesh, the soulful orbs turned heavenward, the distant clouds are all family characteristics. Only Giaquinto’s bold colors depart from Conca’s prototype. One could mention also Conca’s own St. Cecilia, also in Boston and also of these years (Gaeta 1981, nos. 34, 35). In a different way the St. Ceciliamakes a good pair with Solimena’s most Roman picture in the show, the Abduction of Orithyiafrom the Walters Art Gallery. Clear, classical colors, transparent shadows, smoothly rendered, exquisite surfaces, and pearly highlights are the hallmarks. Each in its way is an obeisance by a Neapolitan artist to the Roman manner.
Saint Cecilia was a Roman girl described in the Actsof the Roman martyrs (see Künstle 1936, p. 146); she lived during the reign of Urban I (222-230 A.D.). Though destined to marry a certain Valerianus she was secretly a Christian and has vowed herself ot a life of chastity. When the wedding day arrived, and while appropriate music played, she converted Valerianus to her religious beliefs. Or, to paraphrase the Acts, while the wedding music played Cecilia sang her prayed in her heart. Later she was decapitated by pagan persecutors. In the ninth century her remains were taken to the church of Santa Cecilia in Trastevere, and in 1595 her corpse was again exhumed. At this time Stefano Maderno carved a famous statue of her (1600) showing her recumbent body turned away from the viewer (Santa Cecilia in Trastevere, Rome).
In Giaquinto’s period there was an office for the Feast of St. Cecilia which included the Collect: “Cecilia the virgin sang to the music of the organ and, in her heart, to God alone: ‘Lord may my heart and body be immaculate, that I be no confounded’” (Künstle 1926, p. 149). Particuarly rich musical services were celebrated in her honor and the era abounds with St. Cecilias; Domenichino painted an important cycle of her life in the Polet chapel, San Luigi dei Francesci, Rome (Spear 1982, 178 ff.; Künstle 1926, 146f).