A Pair: Tullia Driving over the Body of Her Father Servius Tullius; The Death of Hector 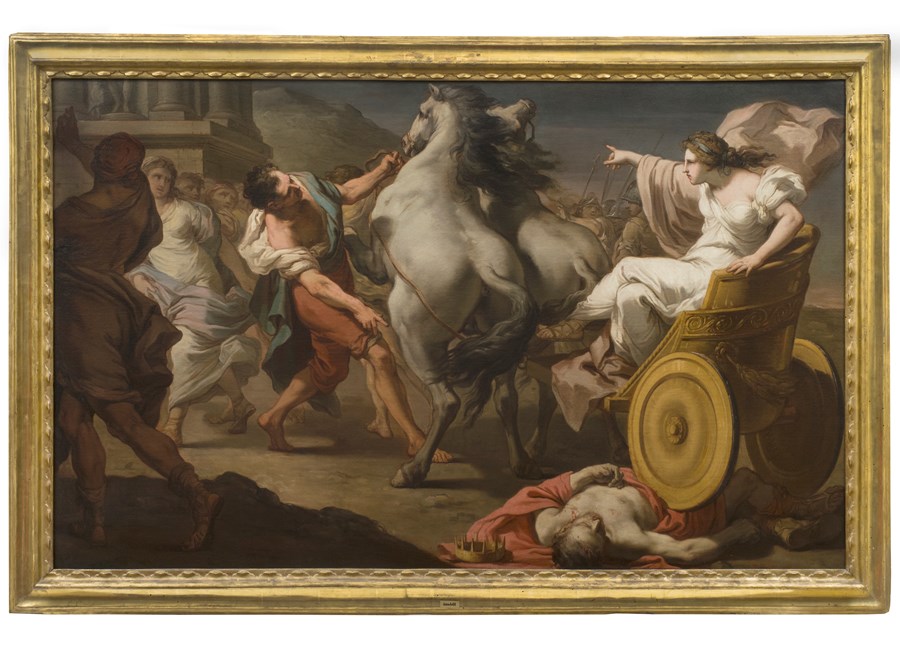 Born in Bologna, Gaetano was enrolled at the local Accademia Clementina by the age of 17 becoming a very successful and distinguished artist, whose work includes more than 200 paintings as well as many terracottas, etchings and drawings. His early works are close to Bolognese classicism; the major turning point in Gaetano’s career came in 1760 when, with the help of a rich patron, the merchant Antonio Buratti, he went to Venice for a year: the virtuosity of his brushwork, indistinct contours and a lighter-rainbow palette evident in many paintings of the 1770’s ( Circe and Ulysses, 1766 Museo Civico, Piacenza; St. Peter in prison 1766, Staatsgalerie, Stuttgart) reveal how deeply the influence of Venetian art had changed his style.

From 1770 Gandolfi received many commissions from religious and secular patrons for paintings on canvas as well as major decorative projects, such as the Aurora (1770, Pal.Guidotti), Venus, Bacchus and Ariadne (1772, Pal.Gini) Sacrifice of Ifigenia and some grisaille figures for the Palazzo Scagliarini (1780); between 1776-9 he completed his most important religious commission, the cupola fresco with Assumption of the Virgin in the church of Santa Maria della Vita, Bologna. In 1787 the painter was invited to London for a six month visit, the contact with the broader European scene had an immediate effect on the style of his late career which integrated the simplified compositions of Neoclassism into his strong figurative ones, giving dramatic emphasis by sharp contrast of light and dark rather than through color.

Our paintings, together with two other canvases, Alexander presenting Campaspe to Apelle (Private Collection) and the Rape of the Sabines (Private Collection), evidently conceived as a group, are successful examples of Gaetano’s Neoclassicism and late style. From inscriptions on two of the four preparatory drawings for these paintings they can be dated to 1797-9; the drawings are now in: Metropolitan Museum New York (Alexander, no. 62.132.3); the Goelet Collection (Rape of Sabine); The Royal Ontario Museum, Toronto (Death of Hector) and the Boston Museum of Fine Arts (Tullia, no. 62.1107); the drawings for the Alexander painting is inscribed on the verso “G.G.F. 1797” that of the Sabine Women “G.G.F. 1799”. There are also less finished studies for the Sabine Women (Darmstadt, no. AE 1581) in brown ink and wash and Hector (Metropolitan, no. 80.3.236) in black chalk.

The present canvases as well as their pendants still retain their original late Baroque frames.

A Pair: Tullia Driving over the Body of Her Father Servius Tullius; The Death of Hector