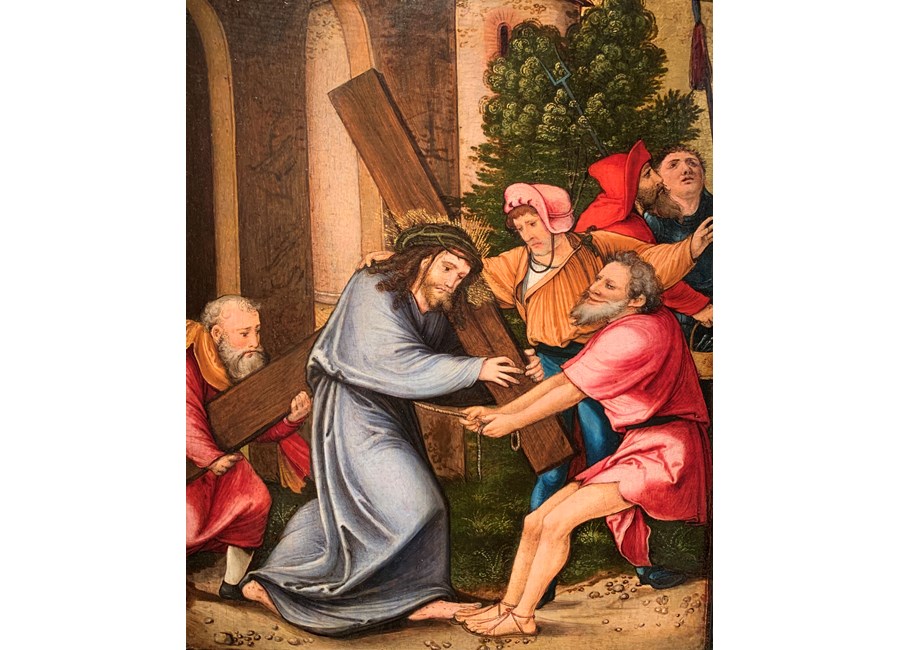 
The earliest provenance for any of the four paintings of the cycle is for the Crowning with Thornsand that only goes back to the early 19thcentury. That panel has its original thin, black protective coating on the reverse, confirming that the panels were always painted only on one side and could not have been part of wings of an altarpiece. Along with the Crowning with Thorns, The Flagellationand the Lamentation must have shared the same provenance at some time, since they all share a similar, not original, black border. According to the 1891 Leipzig catalogue, these four paintings originally formed a series of the Stations of the Cross; it further states pictures in the cycle were allegedly “in Petersburg”. This is conceivable but would mean there must have been at least ten more scenes to complete the series, however, none of them have resurfaced in over 100 years. Thieme (1892, p.70, n.1) states there is no trace of them in Saint Petersburg.

According to Metzger, the closest stylistic comparison can be made to Schäufelein’s woodcuts for the Speculum Passionisfrom 1507, but those scenes are quite standard compositions for early 16thCentury German painting and do not reveal any specific iconographic source. Indeed, there are no meaningful similarities between the present painting and any of the interpretations of Christ Carrying the Crossknown from Schäufelein’s graphic production.

With regard to dating of the painting, the manner in which the figures’ draperies form into soft, flowing pleats, is a stylistic device that is not seen in the artist’s work after 1517. Furthermore, in the Christ Carrying the Crossand other works dated 1516,
Schäufelein employs a stylistic preference for gentle, softly rubbed faces, and reveals a preference for heads seen from below (see St. Peter in the Mount of Olives of 1516). Therefore, the Passion Cycleshould be dated to 1516-17.

Nothing is known about the date and place of Hans Schäufelein's birth or his initial training, but he is considered to have been born c. 1480/1485. Schäufelein probably entered Albrecht Dürer's Nuremberg workshop c. 1503/1504 where he worked alongside Hans Hans Baldung Grien and Hans Suess von Kulmbach.  Dürer's influence is evident in Schäufelein's earliest graphic works, the woodcuts he produced for Der Beschlossen Gart der Rosenkranz, published by Ulrich Pinder in 1505, and in 1507 his illustrations in the Speculum Passionis Domini Nostri Ihesu Christi.

At the time of Dürer's second trip to Italy, Schäufelein seems to have held a responsible position in the shop, for he painted, partly based on Dürer's designs, a monumental Passion altarpiece for Frederick III the Wise, Elector of Saxony, and his brother Johann the Steadfast, in 1505-1507 (Vienna, Dom und Diözesanmuseum).

Schäufelein left Nuremberg and Durer’s workshop around 1507to establish an independent practice.  His former master is known to have used his designs in preparing his celebrated Small Passionand took some of Schäufelin’s graphic works with him on his journey through the Low Countries in 1520-21.Schäufelein was a highly prolific printmaker, He produced most of the 150 woodcuts for a 1507 collection of New Testament passages and texts. A master of narrative, he conceived his scenes as engaging stories, which he populated with well-observed detail.

After leaving Nuremberg, he seems to have gone first to Augsburg where he probably worked in the workshop of Hans Holbein the Elder. His first dated painting, the Crucifixion with John the Baptist and King Davidis dated 1508, and around this time he started to sign works with the combination of his monogram in ligature and a small shovel (Schaufel).

Schäufelein journeyed to Tirol in 1509/1510, where in Niederlana bei Meran he painted scenes of the Passion on the wings of an altarpiece carved a local artist, Hans Schnatterpeck. He returned to Augsburg in 1510 where he contributed to woodcut projects for the Holy Roman Emperor Maximilian I, designed book illustrations for local publishers, painted, and designed stained glass. In1513 he painted a large altarpiece with scenes of the Passion and the Apocalypse for the high altar of the Benedictine abbey at Auhausen, near the Swabian city of Nördlingen.

In 1515 Schäufelein moved to Nördlingen in Swabia, which may have been his birthplace, and quickly obtained citizenship. This began a periodof great productivity where, as city painter, his focus shifted to painting. He painted portraits, provided a mural for the city hall, which is still in place, and designed numerous woodcuts. He maintained contact with Nuremberg, where he met with Dürer and painted portraits and a town hall decoration. Schäufelein's late prints were often published in Nuremberg.

However, it was, as always, the influence and example of Dürer that remained paramount for him throughout his career. Schaufelein was an important and talented communicator of the Dürer’s style. Among his last works are the illuminations of 1537/1538 in a prayer book done for the Counts of Oettingen. He died sometime between 1538 and
11 November 1540, when his wife is mentioned as a widow.