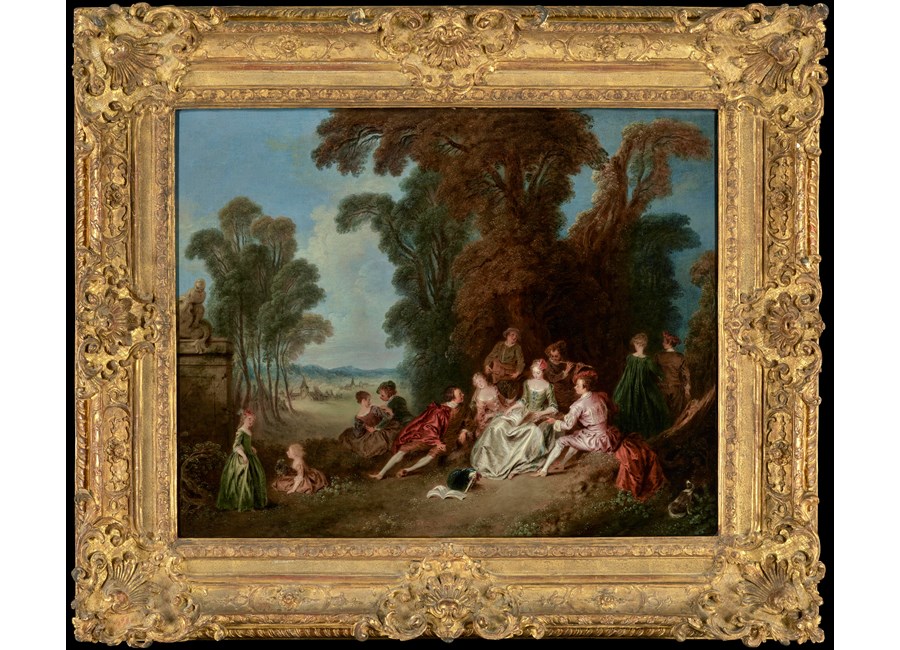 The Stafford Concert Champêtre amply displays the charms of Pater’s art at its most seductive. In a lushly overgrown park, with towering trees of Summer green and autumnal reds, a group of ten young men and women– several making music as two amorous couples absent themselves into the woods – play instruments, prepare to sing, and flirt with each other, while two children amuse themselves at a distance, quietly observing the adults; through the allée of trees, a small village with a church tower can be glimpsed. The airy composition fans out with an altogether pleasing rhythm and gentle grace. The figural groupings in Pater’s painting unfold in a serpentine line running across the middle ground of the canvas, scattered with poses and vignettes familiar from the paintings of Watteau: the playfully erotic garden sculpture that seems to comment on the human activities taking place below it; the seated couple fumbling and falling into an embrace; the young women flirting with the gallants who serenade them.

As in Watteau’s fêtes galantes, the lovers in the present painting wear an imaginative mixture of contemporary clothing and fancy dress, with the women in elegant street clothes and the men in theatrical costume. Pater would undoubtedly have selected from his large repertory of small, quickly observed, red-chalk studies on which to base each of the participants, but he also modelled the central figure of a seated woman leafing through a songbook on a trois crayons drawing by Watteau, now in the Art Institute of Chicago (c. 1717; inv. 1958.8; R/P538). Unlike Watteau, who took great pains to recreate accurately the precise fingering employed by the flutists and lute-players that he painted, Pater makes no effort to anatomize the process of music-making and renders his models’ fingers schematically. He does, however, capture with force and economy a quality of intense concentration in the musicians’ faces, and he shapes their figures into pleasing silhouettes. The easy humor that characterizes the art of Pater is on clear display here, as is his fine touch, feathery brushwork and unmistakable palette of pearly pinks, silvery greys, milky ivories and acid blues.

Elizabeth “Mimi” Stafford was a true connoisseur and scholar of the world—a woman whose lifelong passion for ideas served as the cornerstone of a remarkable private collection. “The art of collecting is a thing that comes very naturally,” she once observed. “Each person will reach out and find that aspect of art which appeals to him….” Together with her husband, the financier Frederick M. Stafford, Mimi Stafford embarked on a decades-long journey in collecting—an inspiring pursuit of knowledge and beauty.

Born in New Orleans in 1928, Mimi Stafford epitomized the elegance and charm of a bygone era. After graduating from Tulane University’s Newcomb College, the ambitious young woman assisted U.S. High Commissioner for Germany John J. McCloy in the rebuilding efforts that followed the Second World War. It was during her travels with the State Department that she met the European-born banker Frederick M. Stafford, whom she married in Paris in 1952. In the years to come, the couple would welcome three children, John, Alex, and Alexandra Stafford. The Staffords first settled in New York City, and relocated to Paris in 1961. In Paris, Mimi Stafford focused much of her energies on civic engagement and Franco-American relations, serving as a board member of the U.S.O., the American Cathedral in Paris, and France-Amérique. Just as Mimi Stafford’s own life extended from New Orleans to New York, Paris, Palm Beach, and beyond, her collecting also reflected a diversity of experience across time and geography. Like many, her interest in art was fueled in its early stages by the joy of intellectual discovery and a curiosity toward the relics of the past.

Through personal erudition and in collaboration with curators, scholars, and artists, Mimi Stafford assembled a fine art collection that perfectly mirrored her fascination with history and beauty. It was an all-encompassing vision: in Paris, she transformed her family’s residence into an elegant recreation of an eighteenth-century French home—a strikingly authentic mise en scène she graciously opened to academics and fellow cultural patrons. In the same way that art so greatly enriched her own life, so was Mimi Stafford keen to share the wonders of her collection in the public sphere. In 1966, the Staffords lent over two hundred works to the Delgado Museum of Art—now the New Orleans Museum of Art—for the monumental exhibition Odyssey of an Art Collector. The exhibition not only sought to encourage private and institutional collecting in New Orleans, but also to introduce new audiences to art in its many forms. As Mimi Stafford noted of the works in her collection, “there is something for every taste.” James B. Byrne, then director of the Delgado Museum, wrote in the exhibition’s catalogue that, “One might view the Stafford Collection as a petit musée, which brings together enough of the richness and variety of man’s artistic endeavor, as to cause wonder and delight at his almost endless inventiveness.” In collecting, Byrne added, one “creates a self-portrait; an autobiographical statement which is unique and distinct.” For Mimi Stafford, that statement was one in which a stone Cycladic figure could instill the same sense of awe as Constantin Brancusi’s masterful La jeune fille sophistiquée (Portrait de Nancy Cunard), the latter of which her husband bought as a birthday present for her directly from the artist in 1955.

Throughout her life, Mimi Stafford provided significant financial support, bequests of fine art, and personal leadership to institutions including the New Orleans Museum of Art; the Museum of Fine Arts, Boston; the Metropolitan Museum of Art; the National Gallery of Art; the Frick Collection; the Morgan Library & Museum; the Metropolitan Opera; and Memorial Sloan Kettering Cancer Center. Even into her later years, she exuded a sense of insatiable curiosity and élan, as comfortable at a black-tie Manhattan dinner as she was traveling through the Middle East and Africa. With each new day, Mimi Stafford saw new possibilities for intellectual, spiritual, and artistic discovery—a joyous celebration of life at its fullest. In her collection of fine art, this inspiring generosity of spirit continues to resonate.