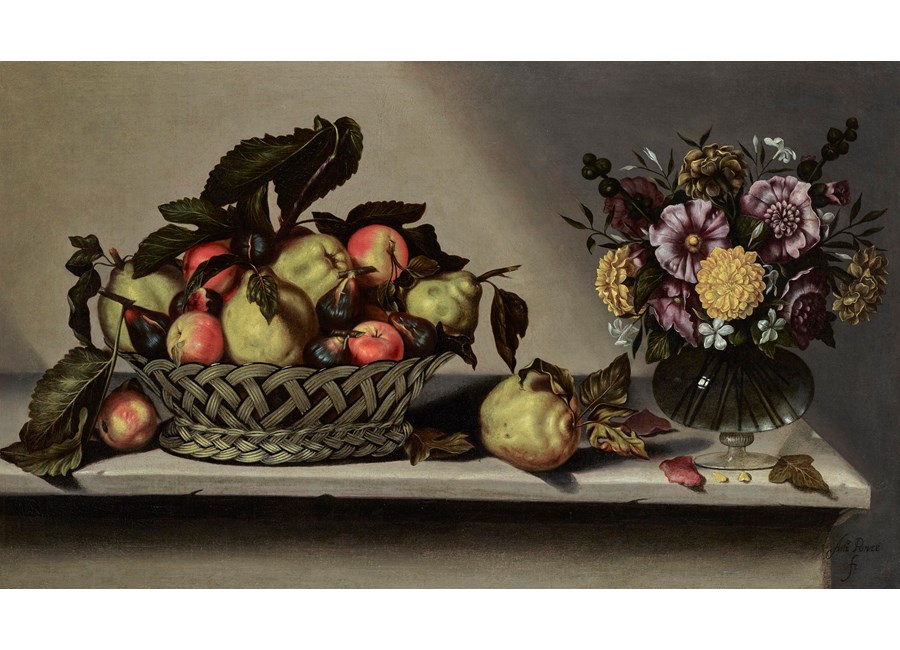 Antonio Ponce was born in Valladolid and raised in Madrid where he began his career as a artist. In 1624 he was apprenticed to the great still life painter Juan van der Harmen y León, whose niece he married in 1628. His early style owed much to his uncle by marriage, as he adopted the dark backgrounds and ordered, symmetrical compositions which had been favored by the earlier generation of still life painters in Spain. As his career progressed he began to develop his own distinct artistic identity and style, lightening the backgrounds of his paintings to allow for a more complex and subtle play of light and shade, and arranging his compositions more informally.

Signed ‘Anto Ponce / f’, this newly discovered work is among the artist’s most beautiful and ambitious works. It dates from the 1640s or 1650s, when Ponce’s paintings – often featuring baskets of fruit – were increasingly characterized by lightened backgrounds, less regimented designs, softer lighting and freer brushwork, through which he was able to convey the textures of objects and endow the subject with greater natural feeling. The painting depicts a basket of apples and quinces and a glass vase of flowers on a stone ledge. Between the basket and vase, a large quince overhangs the stone ledge, linking the principal motifs and enhancing the sense of space. Characteristically, each element is treated with particular care and a clarity of style which exemplifies the artist’s works of this period. His luminous background is pale, and the leaves, fruit and flowers are sharply silhouetted against it, revealing the influence of Caravaggio’s celebrated Basket of Fruit (circa 1599) in the Ambrosiana, Milan. In format and compositional complexity, the present lot is similar to the Ponce’s Flowers in a vase and fruit in a bowl on a ledge, recently sold at Christie’s London (7 December 2016, lot 62).

The fruit basket in our painting has a distinctive weave and plaiting and can be found again in Ponce’s small Basket of fruit in a Spanish private collection (see W. B. Jordan, Spanish Still Life in the Golden Age, 1600-1650, exhibition catalogue, Fort Worth, 1985, p. 175, fig. IX.7).