Portrait of James Adam (1732-1794), in an embroidered waistcoat and fur-lined blue coat, holding a pair of compasses and a scroll 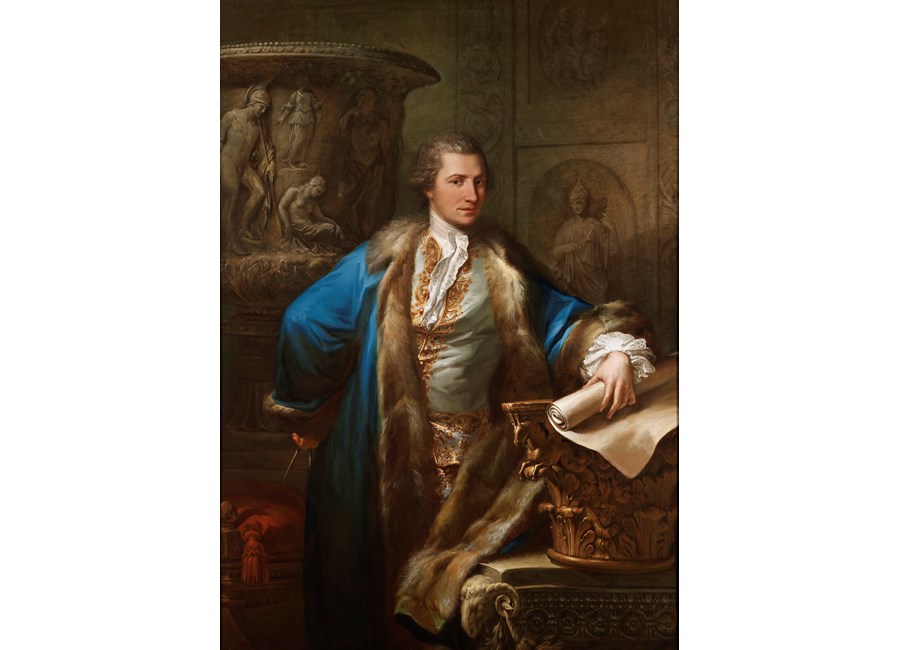 James Adam (1732-1794) was the third son of William Adam (1689-1748), the leading Scottish architect of his generation. Like his elder brothers, John and Robert, James in turn became an architect. Following the example of Robert, he travelled to Italy in 1760, returning in 1763. He travelled extensively in Italy, and dealt in works of art, acting as agent on behalf of his brother’s patron, John, 3rd Earl of Bute, in the purchase of the drawings collection of Cardinal Albani for King George III. On his return to Britain, James worked in partnership with his brother Robert, and designed a number of buildings independently.

That the portrait is signed by Zucchi, with no other portrait by him ever recorded, has rather surprisingly been overlooked until recently. Zucchi’s talents as an engraver had been recognized by Robert Adam in 1757. James Adam met Zucchi in Venice in 1760 and planned to employ him as draftsman for a projected “Antiquities of Magna Grecia”, and the artist travelled with him to Rome, where they arrived in February 1761. Adam travelled in some style, and wrote that he was the only artist in Rome who “keeps his own coach and assumes the title of Cavalieri (Fleming, op. cit., p. 281). Zucchi’s portrait is a clear expression of this audacious view. Inspired by portraits of those on the Grand Tour by Batoni, Adam is shown both as an architect and a man of fashion, with a particular interest in classical statuary and ornament. Adam regarded Zucchi as “a worthy honest lad, a most singular character in this degenerate country”, but failed to persuade him to come to England and work for the Adam firm on his return in 1763. In 1766, however, he accepted an invitation from Robert Adam to work for the firm. Zucchi’s abilities as a decorative painter are demonstrated in many of Adam’s most celebrated houses, including Harewood, Kenwood, Kedleston, Newby, Nostell, Osterley and Saltram, as well as a number of outstanding London houses. In 1781 Zucchi married Angelica Kauffman and settled with her in Rome.

Portrait of James Adam (1732-1794), in an embroidered waistcoat and fur-lined blue coat, holding a pair of compasses and a scroll