Study of a Bearded Man 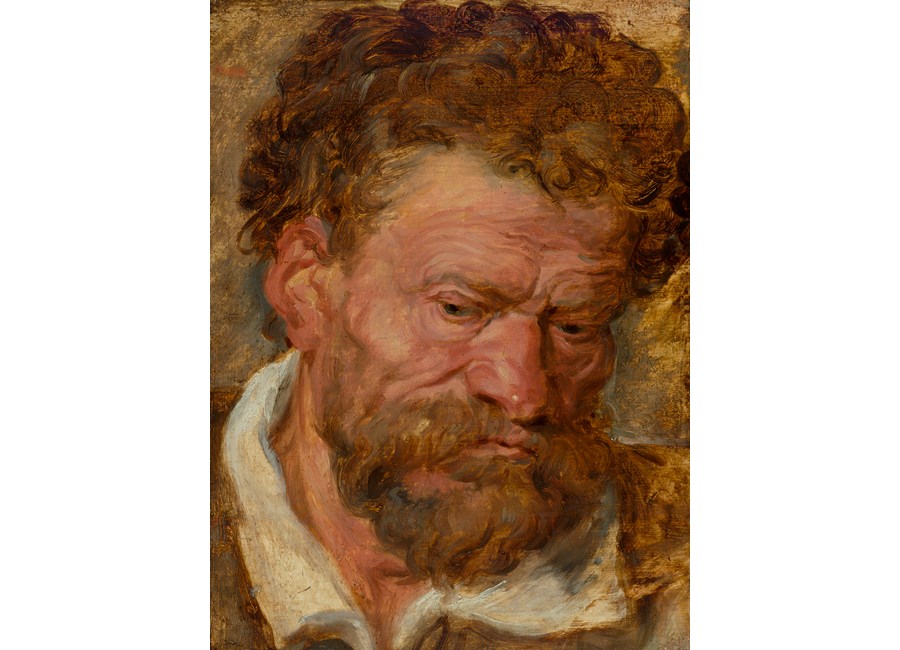 The present sketch has been examined first hand and accepted as autograph by Dr. Adam Eaker, Assistant Curator of Northern European Paintings at the Metropolitan Museum, and Dr Christopher Brown, the well-known expert on the work of van Dyck and the former Director of the Ashmolean Museum. Both agree that the work can be dated to c. 1618. Dr. Frits Duparc, former Director of the Mauritshuis, judging from a photograph, also endorses the attribution. Dr. Keith Christensen, Chief Curator at the Metropolitan Museum of Art, has also examined the sketch in person and concurs with Dr. Eaker.

Van Dyck’s early oil sketches are the most immediate and inventive records of the young artist’s creative genius. This freely, almost fiercely painted study was likely executed circa 1618, when van Dyck was merely eighteen years old and a new apprentice in the studio of Peter Paul Rubens. In preparatory studies of this kind van Dyck would typically apply his paint rapidly and with a loaded brush. This unique application technique is particularly noticeable in the areas of lively brushwork used to pick out the hair, beard, and deeply etched lines of the man’s face.

Apart from Rubens, van Dyck was the greatest Flemish painter of the 17th century. Born in 1599 to a family of patrician merchants, but his childhood was marked by difficulties of his mother’s early death and his father’s financial challenges. In 1609, he began an apprenticeship with Hendrick van Balen in his native Antwerp. Exceptionally precocious from the start, van Dyck’s remarkable skills were quickly recognized by Rubens, whose influence would be a major factor in van Dyck’s artistic development. Although van Dyck did not become a master in the painters' guild until 1618, there is evidence that he was working independently for some years before this, even though this was strictly forbidden by guild regulations. Probably soon after leaving van Balen, he entered Rubens's workshop, however, not as Rubens's pupil but rather as an assistant, as he was already an accomplished painter when he went to work for him. Nevertheless, the two years he spent with Rubens were decisive, and Rubens's influence upon van Dyck’s painting is unmistakable.

In figural compositions during the first eight years of his career, van Dyck obviously emulated Rubens’s melodramatic style, though, instead of using Rubens’s technique of enamel-like glazes, he painted directly and with a rather coarser texture. His color scale was darker and warmer than Rubens’s, and he exaggerated the expression of his figures, from the fierce emotion or transporting ecstasy of saints and the brutality of executioners to the voluptuous allure of nymphs and satyrs.

The present boldly handled sketch reveals the Flemish robustness of van Dyck’s early style which would evolve into the grace and refinement seen in his later portraits. This head study from his earliest maturity in Antwerp is key to understanding van Dyck's working method at this formative time in the young artist's career.

This sketch demonstrates how fully van Dyck had absorbed the lessons of Rubens, as well as how quickly he had begun an independent practice that enabled him to develop his own signature style.  This man depicted was likely a studio model, whose likeness would have been recorded in various figure studies. Such a practice would have been well known to van Dyck given its widespread use in Rubens' studio. The idea of creating, keeping, and re-using studio oil sketches made from life was first developed by Frans Floris in the Southern Netherlands, and later embraced by Van Dyck’s Flemish contemporaries, especially Rubens and Jacob Jordaens. These tronie, or head studies, were reused on numerous occasions. The sketch would have stayed with van Dyck in his studio as a reference point from which later figures could have been based. These heads became part of their studio repertory, kept on hand to be used in various multi-figured compositions throughout the artists' careers.  Rubens himself so valued Van Dyck's early studies that he kept them long after his most gifted assistant had left his workshop, and many appear in the inventory of his studio at his death.

Oil sketches such as this are regularly recorded in seventeenth-century Flemish collections and attest to the early appreciation of even these more roughly executed examples of Van Dyck’s precocious talent. A number of preparatory oil sketches from van Dyck’s early period in Antwerp survive today, while later in his career their creation and use in his artistic practice appeared to have diminished.

Study of a Bearded Man