"The Holy Family with the Infant Saint John the Baptist" 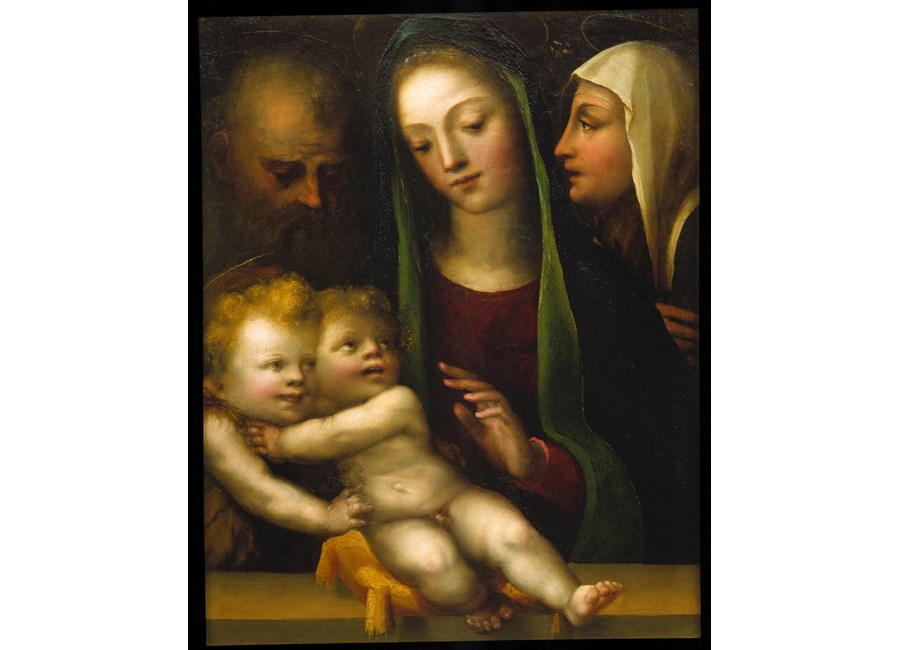 Works by Beccafumi, the wonderfully poetic Sienese painter of the sixteenth century, clearly reflect the artist’s awareness of the work of his contemporaries. He was a year older than Raphael, yet developed a precocious mannerist style, which reveals him to have played a vital role in the development of Renaissance art. Although none of his works are signed or dated, his lively and often idiosyncratic compositions are unmistakable. The vast majority of his oeuvre, especially frescoes and altarpieces, remain in Siena, with only a handful of small-scale pictures known to be in collections elsewhere. He also worked as an illuminator, print-maker, and sculptor, and achieved fame in his own lifetime, earning praise from his friend Giorgio Vasari in the first edition of The Lives of the Artists, published one year before Beccafumi died in 1551.

This panel was painted for private devotion and can be dated on stylistic grounds to about 1516, after the painter's return from a visit to Rome. The composition is tightly arranged, and the mood is one of intense contemplation combined with playful movement. The tender yet detached gesture of the Virgin shows clear influence of Raphael's Bridgewater Madonna, and the dynamism of the children echoes the latest works by Fra Bartolommeo, Andrea del Sarto, and Rosso. The figure of Saint Joseph, partly enveloped in shadow, is wonderfully observed, while the mystic Saint Catherine (1347-1380; canonized in 1461) is depicted gazing steadfastly at the Virgin, holding her customary lilies. "Her prayers were of such intensity," wrote one contemporary, "that one hour of prayer consumed that poor little body more than two days upon the rack would have done another."

The contrast between the dark background and the luminous impasto of the blond figures in the foreground is typical, as is Beccafumi’s powerful use of color: the cushion is described with vivid, liquid brushstrokes of golden ochre, while the deep cherry red of the Virgin's robe, offset by the green lining of her mantle, emerges as a ribbon of bright pink at her wrist.
The painting must surely have been purchased by Earl Cowper while he was a resident in Florence, from about 1760 to 1789, where he was advised by the painter Zoffany, whose celebrated Tribuna of the Uffizi (in the Royal Collection, Windsor) portrays the Earl at his zenith in front of the Raphael he was soon to own (now in the National Gallery, Washington). He also owned a Holy Family by Fra Bartolomeo, recently acquired by the Getty Museum, and works by Puligo, Pontormo, Dolci, and Guercino. This Beccafumi, rarely seen until now, is in every way their equal.

"The Holy Family with the Infant Saint John the Baptist"