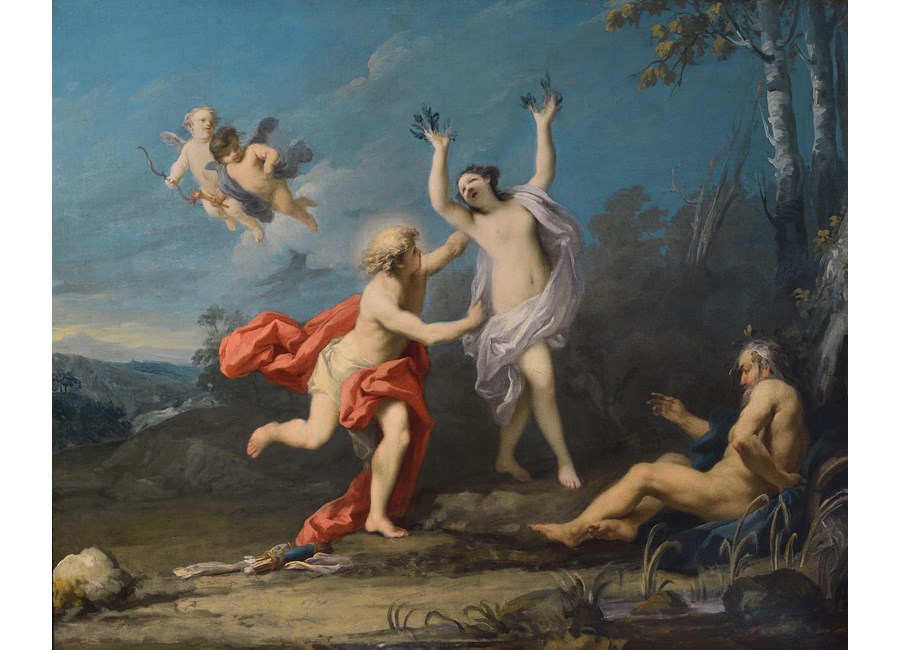 Jacopo Amigoni was a pioneering painter of the Venetian baroque.  As a history, decorative, and portrait painter of the late-Baroque or proto-Rococo period, he began his career in Venice, but traveled widely and was incredibly prolific throughout Europe, thereby of profound influence on the establishment of a truly international decorative style.

Born 1682 in Naples of Venetian parents, Jacopo Amigoni was already established as a painter in Venice by 1711, where he was first recorded in the Venetian painters’ guild. According to Vertue he studied under Antonio Bellucci in Düsseldorf. Because of his soaring reputation established in Venice, he was summoned to work in Bavaria in 1717, where he painted decorative ceiling frescoes in Munich for the court of Maximilian II Emmanuel, Elector of Bavaria and in Ottobeuren for the Benedictine Monastery.  He visited Venice, Rome and Naples 1728–9, and in 1729 left Germany, travelling through Holland to England, where he remained until 1739, with only a brief visit to Paris with the famous castrato singer Farinelli in 1736. Amigoni married the mezzo-soprano Maria Antonia Marchesini (‘La Lucchesina’) in 1738. In England, he worked mainly in and near London, painting a considerable number of portraits and also collaborating with George Lambert on scenery for the Covent Garden Theatre, possibly including that for Handel's Atalantain 1736.

Amigoni left England for Venice in August 1739 and there encouraged Canaletto to make his famed visit to England. In 1747 an appeal from Ferdinand VI led Amigoni to work in Spain, where he died in Madrid in August of 1752.

Amigoni’s work was enormously popular in his lifetime and inspired the development of the Rococo style throughout Europe.  His influence spread to the great capitals of Europe by means of numerous prints of his paintings, and through the many tapestries, clocks, and porcelain pieces based on his designs.  Amigoni’s work always reveals an artistic core based on the great Venetian masters of his youth, such as Bellucci, Sebastiano Ricci and Giovanni Pellegrini.  However his work clearly moved away from the bold, heavy and dramatic style of Baroque painting toward a lighter more graceful art form.  He uses a more painterly handling of the brush, employing a delicate palette of reds, ochres and beautiful blues.  His work was meant to charm and beguile and was less pedantic in intent. In works such as Apollo and Daphne,Amigoni uses a gem like palette and arranges his figures beautifully against a vast and radiant azure sky.