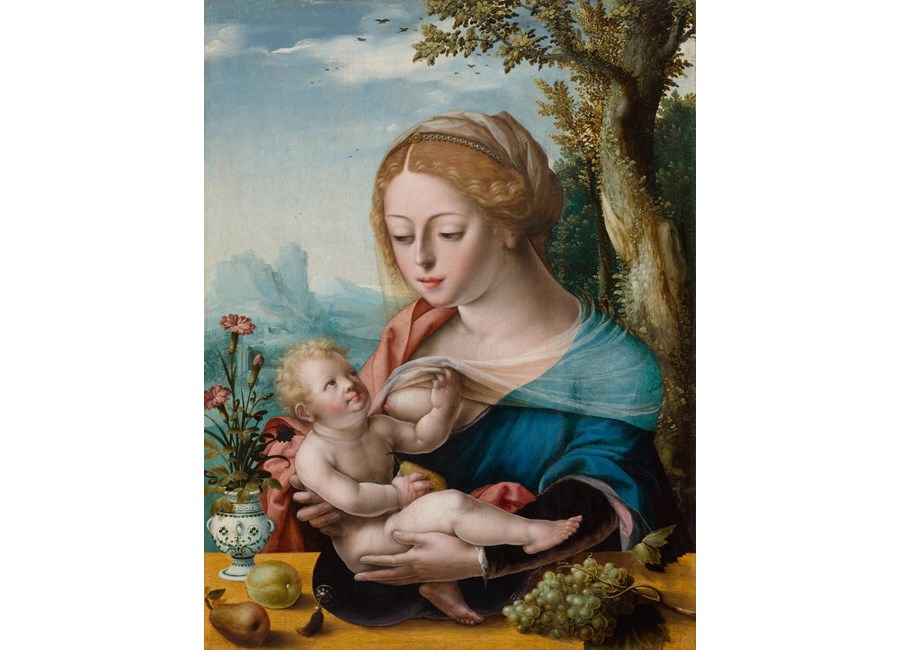 The Virgin and Child was first published by Max Friedländer in the 1949 article in which he defined theMaster with the Parrot’s artistic personality based on a core body of 15 paintings, including the presentpanel, and placed his production in Antwerp in the third and fourth decades of the 1500s. It remains one ofthe Master’s finest known works, and bears close similarities to his name-piece in the San Diego Museum of Art. While his Antwerp workshop turned out numerous replicas of modest quality, the Master with theParrot’s best pictures portray an artist who synthesized the many currents flowing through Antwerp into adistinctly colorful and sculptural style. With its unmistakably northern composition and coloring, but clear Italian influences, it neatly illustrates the transmission of artistic ideas from south to north in the early sixteenth century.
The panel shows the wide range of influences upon Antwerp artists in the 1520s and 1530s. The parapet covered with symbolic still-life elements is particularly reminiscent of the many renditions of the Virgin and Child and Holy Family by fellow Antwerp citizen Joos van Cleve. The strongly shadowed, sculptural figure of the Christ Child calls to mind Jan Gossaert’s work. However, there is also a pervasive Italian feel to the painting, most notably in the haziness of the distant background and the sfumato in the child’s face. Recentexhibitions on Joos van Cleve (Aachen 2011) and Jan Gossaert (New York and London 2010-11) focused on how these artists absorbed the ideas of the Italian Renaissance; the present picture speaks to their rapid dissemination through the Low Countries.
The Virgin and Child is in an excellent state of preservation. It was cleaned and lightly restored by Laurent Sozzani, the former senior paintings conservator of the Rijksmuseum, in 2012, and reframed in an Italian 16th century style black and gold cassetta frame with sgraffito design.