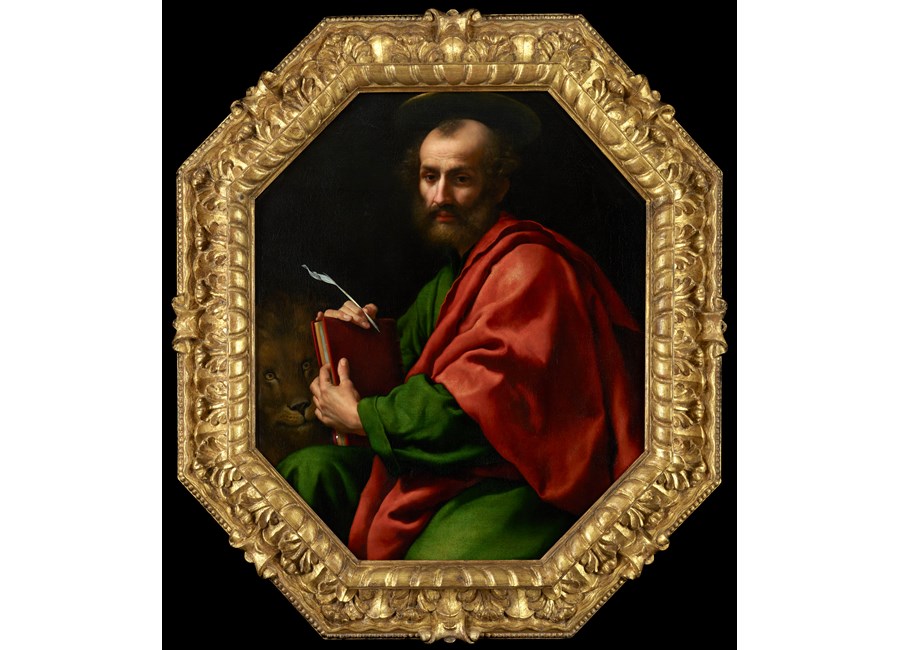 This picture originally formed part of a set of the Four Evangelists, which together constitute a formidable highpoint in the artist's output and, according to Baldassari, 'the masterpiece of Dolci's youth' (op. cit., 1995, pp. 21-22). She dates the canvases to circa 1640, taking note of Baldinucci, Dolci's pupil, friend and biographer, who records that they were 'made by Carlo in his youth for a confessor, for no more than five scudi each'; earlier on the same page, he identifies Canonico Domenico Carpanti as Dolci's confessor, for whom the artist also executed a vanitasstill life (now lost). As Burton Fredricksen points out in his 1976 article, the care taken by Dolci in this commission would seem to reflect the affinity felt by the pious artist for his confessor, as well as his need to establish a reputation at this early stage of his career.

Baldinucci also records that the four octagonal pictures 'were bought by Giovambatista Galli for 120 scudi [and] Carlo then worked on the pictures again, rendering them even more beautiful'. Giovanni Battista Galli, born in 1642, had inherited from his father Agnolo a fine collection of Florentine seicentopaintings, including Lorenzo Lippi's Triumph of David, which contains portraits of Giovanni Battista, his mother and his fifteen siblings, painted in 1656 (exhibited Florence, Palazzo Strozzi, Il Seicento Fiorentino, Arte a Firenze da Ferdinando I a Cosimo III, 21 December 1986 4 May 1987, Pittura, pp. 346-8, no. 1.184). He took the opportunity to purchase the present picture and its companions in order to augment the collection in the family palace in via Pandolfini, where 'the four Evangelists by Dolci' were noted by Giovanni Cinelli in 1677 (loc. cit.).

They are next recorded at the end of the seventeenth century in the collection of Cosimo Riccardi (1671-1751), and appear in various inventories of the family palazzo on the via Larga (the Palazzo Medici-Riccardi) throughout the eighteenth century. In 1810, they were acquired from the family by Napoleon's brother, Lucien Bonaparte, Prince of Canino, who was in Italy from 1804 until 1810. On his way to America in 1810, Bonaparte was captured at sea by the British and held in London until 1814. He returned to Rome after his release, but his collection of paintings was consigned in London for sale, for reasons that have never been completely understood, possibly financial in nature. While in Bonaparte's collection Buchanan remarked that 'of the works of this esteemed master none exist which hold a higher rank, or have been more esteemed than the Four Evangelists in this collection'. They formed part of the principal ornaments of the Riccardi Gallery at Florence' (loc. cit.).

When the collection was sold the series was dispersed; Saint Matthewand Saint John the Evangelistbeing sold privately to Sir Simon Clarke, while Saint Markand Saint Lukewere included in the public sale held by Stanley in London on 16 May 1816. Buchanan does not record who bought Saint Markbut the price it achieved, £125, was extraordinary for the time. It later reappeared in the collection of William, Prince of Orange, subsequently King William II of the Netherlands, by 1837. This collection was considered by contemporaries to be one of the finest in Europe. By 1838, the then-Prince had already assembled an impressive group of Old Master pictures and drawings, including Raphael's Head of a Muse(sold at Christie’s London, 8 December 2009, lot 43, £29.2 million), which appeared alongside the present work in the 1850 sale of the King's collection (as lot 24). It is revealing of contemporary taste to note that the Dolci was then valued at more than ten times the price realized for the previously mentioned Raphael drawing.

Two of the other three Evangelists from the series can be traced today: Saint Matthewis in the J. Paul Getty Museum, Malibu (Baldassari, op. cit., 1995, no. 30; see fig. 1), and Saint John, sold at Christie's, New York, 11 January 1995, lot 99, is now in a European private collection; The fourth canvas of Saint Lukewas last recorded in the Morrison Collection at Basildon Park, but its current location is unknown.