The Courtyard of the Fortress of Königstein with the Magdalenenburg 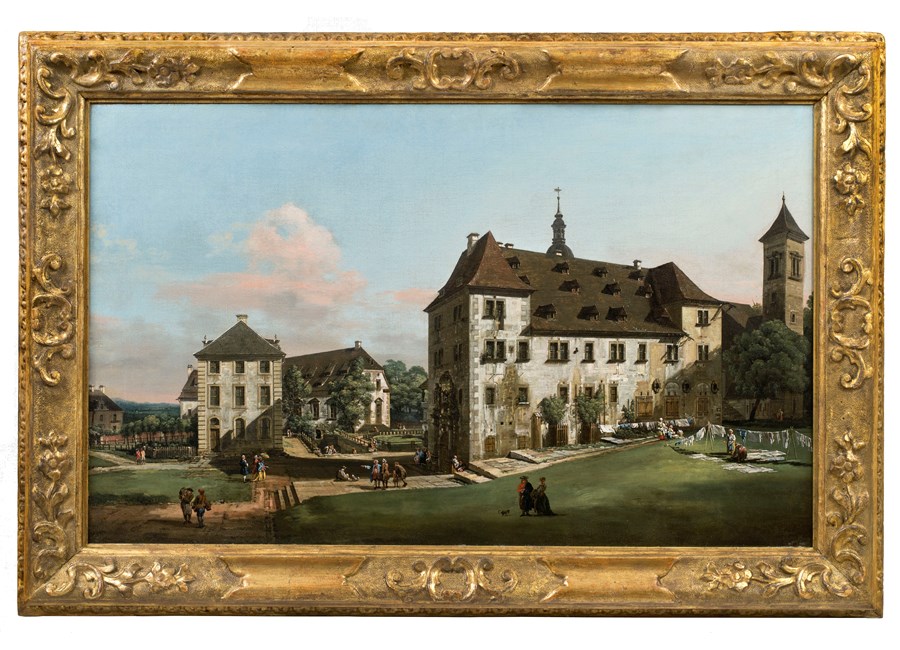 Bernardo Bellotto was the nephew of the celebrated Venetian view painter Canaletto, whose studio he entered around 1735.  He so thoroughly assimilated the older painter’s methods and style that the problem of attributing certain works to one painter or the other continues to the present day.  Bellotto’s youthful paintings exhibit a high standard of execution and handling, however, by about 1740 the intense effects of light, shade, and color in his works anticipate his distinctive mature style and eventual divergence from the manner of his teacher.  His first incontestable works are those he created during his Italian travels in the 1740s.

In the period 1743-47 Bellotto traveled throughout Italy, first in central Italy and later in Lombardy, Piedmont, and Verona.  For many, the Italian veduteare among his finest works, but it was in the north of Europe that he enjoyed his greatest success and forged his reputation.

In July 1747, in response to an official invitation from the court of Dresden, Bellotto left Venice forever.  From the moment of his arrival in the Saxon capital, he was engaged in the service of Augustus III, King of Poland and Elector of Saxony, and of his powerful prime minister, Count Heinrich von Brühl.  In 1748 the title of Court Painter was officially conferred on the artist, and his annual salary was the highest ever paid by the king to a painter.  Despite his relatively young age, Bellotto was quickly set to work on his celebrated series of fourteen large views of Dresden and, from 1753, nine views of the neighboring town of Pirna for the king-elector, as well as full-scale replicas of these of equal distinction for August III’s cultivated chief minister, Graf Heinrich von Brühl (1700-1763). On 26 April 1753 the bailiff of Pirna, Crusius, was instructed to assist Bellotto while he made drawings of the area.  Crusius received a further warrant with the same instructions with respect to Königstein in the spring of 1756 (Kozakiewicz, op. cit, 1972, p. 83). It can be assumed that by then Bellotto had completed the forty-six canvases of Dresden and Pirna for both Augustus III and Brühl, and that he worked on his views of the castle in the ensuing months.

The present view of the great castle of Königstein is an autograph reduction of one of Bellotto’s five large-scale views of the castle, painted for Augustus III, Elector of Saxony and King of Poland (1696-1763). The massive fortress of Königstein crowns an outcrop above the valley of the Elbe, where a castle was recorded as early as 1241, when the area was controlled by the kingdom of Bohemia.  This ultimately passed in 1459 to the House of Wettin, successively margraves of Meissen and electors of Saxony.  The Elector Christian I greatly enlarged the castle in the later sixteenth century: and this eventually became the largest fortress in Saxony and was carefully maintained by his successors. In this composition Bellotto depicts the main courtyard of the castle, and the substantial block of the Magdalenburg, probably as viewed from the former Arsenal.  To the right of this is the church that incorporates the original thirteenth-century chapel, while on the left are the three bays of the south end of the Brunnenhaus.

The king-elector found himself on what was to be the losing side at the outbreak of the Seven Years War in the summer of that year. The Saxon army was routed at Lilienstein on 14 October 1756, and six days later Augustus and his sons left Königstein for Warsaw. By then Bellotto had presumably made all the preparatory drawings, but not completed his five large canvases with views of the castle. Augustus III’s wife, Maria Josepha, remained in Dresden, holding the key to the picture gallery until her death in 1757, when this passed to the Crown prince. In September 1759, after the bombardment of the city, the Saxon royal collection, including, one must assume, Bellotto’s views of Dresden and Pirna, was evacuated to Königstein.

While Bellotto’s five views of Königstein were clearly intended to be seen en suitewith his earlier canvases, because of circumstances, these were never delivered to Augustus III and are first recorded in England: The Fortress of Königstein with the Lilienstein(Washington, National Gallery of Art no. 1993.8.1) and views of the castle from the north and the south (Kozakiewicz, nos. 233 and 235, the first formerly in the Derby collection) were all apparently owned by Henry Temple, 2ndViscount Palmerston, although these are not listed in his notebook that recorded his acquisitions. The two courtyard views, respectively with the Magdalenenburg and the Brunnenhaus, formerly in the Londonderry collection (Kozakiewicz, nos. 238 and 241), are now at Manchester (City Art Gallery).  The present canvas and another in the Schönborn collection (Kozakiewciz, no. 239), in which there are minor alterations to the figures, depend on the former.

Bellotto received a payment from the Saxon treasury as late as the first quarter of 1758, but Augustus III’s withdrawal to Warsaw and the failure of Brühl to pay the 200 thalers the artist was owed for each of his full-scale replicas, meant that his financial position was insecure even before Dresden was occupied by the Prussians in 1758. Bellotto’s production of reduced versions of the Dresden, Pirna and Königstein views was plausibly believed by Kozakiewicz to have been determined by financial imperatives, and he considered that some of the twenty-six reductions of the Dresden, Pirna and Königstein views, all but three of which are of the same size as the present canvas, were painted during the first two years of the war (1756-1758) for ‘private customers’.

Bellotto himself remained in Dresden until at least 5 December 1758, when records show a passport was being prepared for him. He subsequently went to Vienna, leaving his family in his Dresden house which was destroyed in the fierce bombardment of 12 August 1759, when no doubt the preparatory drawings for the Saxon views were also lost. Bellotto remained in Vienna until 1761, when he went on to Munich, returning to Dresden later in the year, and where he remained until 1766. Kozakiewicz’s final dating of this picture to circa 1760 implies that he believed it to be one of the earlier replicas: it is highly unlikely that Bellotto painted such pictures in Vienna or Munich, so it is probable that it must antedate his initial departure from Dresden in late 1758. Kozakiewicz regarded the ‘great majority’ of the reduced replicas as fully autograph, and the quality of this picture certainly speaks for itself.

During part of the Seven Years’ War Bellotto had worked in Vienna (1759-61) and Munich (1761); he returned to Dresden for five years before he departed in 1767 for Russia.  On the way to St. Petersburg, however, he was invited by King Stansilaus II Augustus to join his court in Warsaw, where Bellotto remained as court painter until his death, again producing outstanding paintings of yet another city.

Bellotto’s remarkable views of the late Baroque capitals of northern Europe remain unrivaled in their topographical accuracy, flawless draftsmanship, and dramatic compositional structure.  His genius lay in his ability to take ordinary urban terrain and with grand, theatrical effects beyond the grasp of most topographical painters offer views that leave indelible impressions.  Even today, Dresden, Vienna, and Warsaw are familiar to many who have never visited eastern Europe but who have seen Bellotto’s depictions of them.  So accurate were the artist’s descriptions of those cities that, in their rebuilding after World War II, his paintings were used as guides, even in the reconstruction of architectural ornament.

The Courtyard of the Fortress of Königstein with the Magdalenenburg