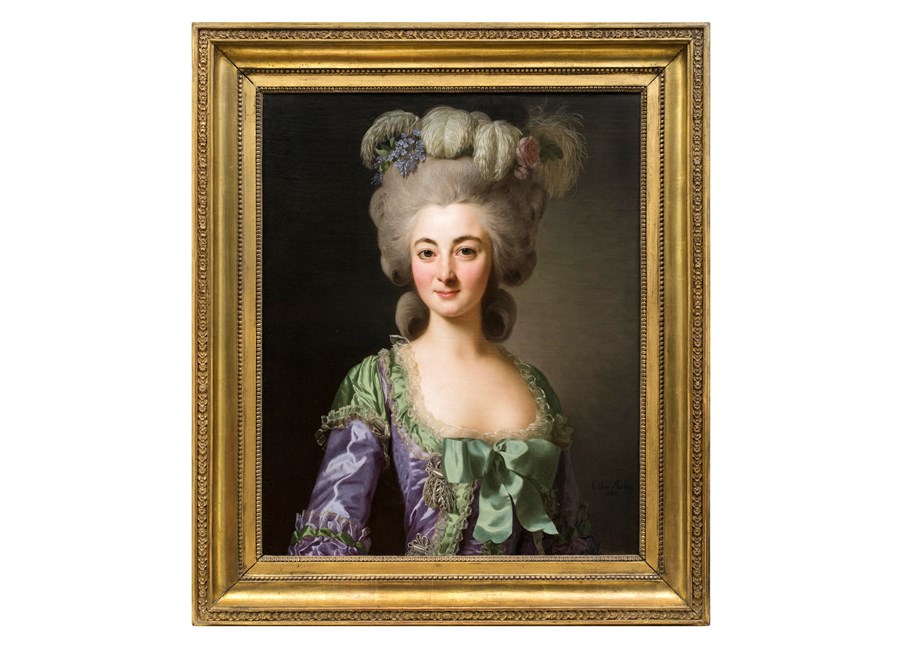 This fabulous portrait, representing Madame Henriette Agathe Rose Foäche, waspainted and signed by Alexander Roslin in 1780 on the occasion of Henriette’s marriage to Pierre Stanislas Foâche (1737-1806), Royal secretary and Councellor to the French King. The work was commissionedto serve as a companion piece to the portrait of her husband, painted by the same artist in 1771.


Around 1780, France faced great changes and filled with optimism regarding the future. It was a bright time characterized by its thirst for new knowledge and joy of life, a douceur de vivreunder King Louis XVI and Queen Marie-Antoinette. The 1780s would constitute the idyllic years before the French revolution.

By this time, Alexander Roslin had for many years been recognized as one of the most sought-after portrait-painters in France. He was born in Malmö and, after studies in Stockholm, left for Paris in 1752. However, he took a long journey to get there, and by the time he arrived in the French capital, he had already managed to work at several different European courts and had added prestigious portrait assignments on his resume.

He was expected to have great success upon arrival in Paris, since he had with him a letter of recommendation of utmost importance. It was a letter from the Duchess of Parma, addressed to her sisters, Mesdames de France - the daughters of the French king. Soon the Swedish artist was assigned the desirable task of depicting the royal family as well as their closest officials. In 1753, only one year after arriving in Paris, Roslin was elected to join the French academy of fine arts and was established as one of the greatest artistic talents of the city. By the end of the 1750’s he was one of the most sought-after portrait painters in all of French high society.

Portraits of ladies constitute some of Roslin’s best work. Descriptions of his methods from the time highlight his unmatched ability to capture a spontaneity and warmth, as well as the particular charms of his subjects and their ability to inspire and make the sitter irresistible to the viewer. This particular painting - despite its air of dignity and respectability - manages to channel intimacy and sincerity and is a remarkable proof of this ability. Moreover, Roslin’s refined technique in depicting surfaces and textures that made him so famous also is fully seen in this painting. The delicate lace across her décolletage and the almost metallic oscillations in the precious silk fabric and ribbon create vibrant areas in this otherwise dignified and gentle composition. This reminds us that Roslin was an artist who spoke to the viewer through the senses.