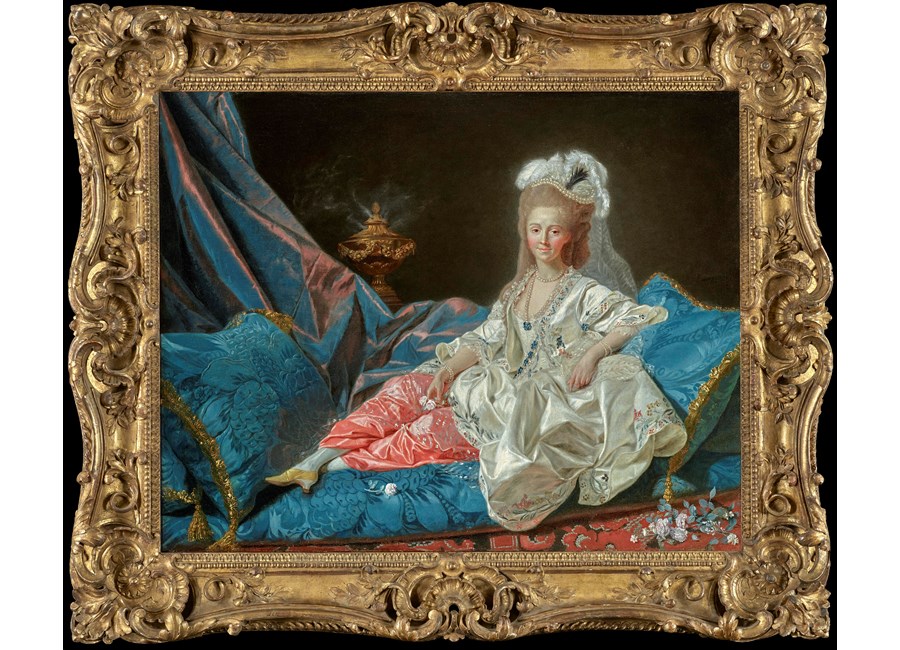 Turquerie’ — or the imaginative, whimsical and sometimes fantastical interpretation of Ottoman Turkish subjects, motifs, architecture and costumes in Western art – was a European-wide phenomenon in the 18th century, and nowhere more widely and enthusiastically explored than in France. The arrival in Paris in 1715 of the Persian ambassador Mehemet Riza Bey, intendant of the province of Erivan, and his exotically attired entourage, caused a sensation in the capital city. Their six-month stay, culminating in an audience with the aged Louis XIV, was chronicled in every daily newspaper; members of the embassy were drawn by Watteau, etched by Boucher and painted by Antoine Coypel; plays about them were written for the stage and satiric sketches performed by the commedia dell’arte at the popular fairgrounds; and the embassy provided the inspiration for one the most enduring works of French literature, Montesquieu’s Lettres persanes (1721). Henceforth, ‘Turkish’ style and subject matter – in ever more luxurious and fanciful iterations — became a staple of ballet and opera, literature, furniture- making and the decorative arts, couture, and painting.

Following the 1721 visit of the Ottoman ambassador, Mehmet Efendi, whose magnificent entry into Paris was recorded by Charles Parrocel in paintings at Versailles, a fashion arose for portraying European sitters in Turkish dress or amid Turkish surroundings. Nattier painted Mlle de Clermont at her Bath in 1733 (Wallace Collection, London); when the portrait was exhibited at the Salon of 1742, following the sitter’s death, the opulent fantasy of Clermont draped in strings of pearls, swathed in ermine and surrounded by Turkish carpets was described in the livret as of 'the late Mlle de Clermont… represented as a Sultana at her bath, served by slaves.' Soon after, in 1743, Aved portrayed The Marquise de Saint-Maure as a Sultana (fig. 1; Private collection), and Carle Vanloo painted an image of Madame de Pompadour, mistress of Louis XV, as A Sultana Taking Coffee (1755; State Hermitage, St. Petersburg) for her bedroom at Bellevue. It was a tradition that would continue unabated until the Revolution.

Étienne Aubry’s delightful representation of a European woman dressed àla turque and reclining on an ‘ottomane’ sofa, follows directly in this line. Signed by Aubry and dated 1779, the painting is traditionally said to depict Catherine Rosalie Gérard Duthé (1748-1830), known as Rosalie Duthé, the celebrated dancer and courtesan. After quitting a French convent at the first opportunity, the young Rosalie became the mistress of the English financier George Wyndham, 3rd Earl of Egremont. Following the end of their affair, she joined the Paris Opéra as a singer and dancer, and exhibited, by contemporary accounts, considerable talent. She became the companion of a succession of noblemen, culminating in a long liaison with the Comte d’Artois, the future Charles X of France. Duthé sat for many portraits and was renowned for her charm and luxuriant hair. François-Hubert Drouais made a fine, conventional portrait of her, today in the Rothschild collections, but L-L Périn-Salbreux (David-Weill Collection, Paris) and Antoine Vestier, more unconventionally, painted her nude. She was a favorite model of Henri- Pierre Danloux (1753-1809), whom she met in London in 1792, when both were living in exile. She commissioned the artist to paint her portrait as a gift to a lover, the banker Jean-Frédéric Perregaux, who remained in France. The finished portrait (today in the museum in Karlsruhe, fig. 2) depicts Duthé in a full-length, small-scale format, shown lifting a framed painting against a wall, as if about to hang it; the subject of the small painting she holds came at her suggestion: it represents a figure of Hope looking out to sea at a departing ship, signally her heartfelt desire to return home. Danloux describes the making of the portrait – one of his finest – in his Journal, noting how much he liked Duthé, despite the fact that she regularly failed to show up for sittings.

Comparisons between Aubry’s image and Duthé’s features in the Danloux painting and other securely attributed portraits are, to this writer, inconclusive, but do not exclude the possibility that ‘La Turque’ could depict the great courtesan, as the tradition states. Furthermore, a suggestive piece of circumstantial evidence might well serve to support the identification: when Claude Godard d’Aucour’s satirical – and lubricious – novel Mémoires turcs, ou, Histoire galante de deux turcs pendant leur séjour en France, first published in 1743, was republished in 1776, the new edition was dedicated to none other than Rosalie Duthé.

If the identity of the sitter is yet to be documented, the overwhelming charm and opulence of the painting is indisputable. Every inch of its surface is surrendered to a dazzling display of Aubry’s virtuosity in rendering materials of every sort: from silk damask to cut velvet, satin, embroidered flowers, pearls, feathers, roses, porcelain, gilt bronze, smoke, and translucent flesh, Aubry’s mastery of the brush is a delightful tour de force. Posed like on odalisque on her sofa, ‘La Turque’ wears a costume that is a compromise between East and West, as the fashion historian Aileen Ribeiro has observed. Her high-piled hair is a characteristic Parisian style of the 1770s and the white feathers in it are à la mode, but with the inclusion of a small black feather aigrette in the Turkish style and a stripped ‘Oriental’ scarf. A similar, transparent silk covers her satin skirt, but the embroidered gown with short over-sleeves – possibly a Circassian dress, notes Ribeiro – is worn over a firmly structured, boned bodice of European origin. Clearly, no-one was ever meant to mistake the sitter for an actual Turkish woman.

‘La Turque’ is an exceptional work for Étienne Aubry, who is best known as a painter of sentimental genre scenes in the manner of Greuze, but who was accepted into the Académie Royale in 1771 as a portraitist; the reception pieces he presented four years later were three-quarter lengths of fellow artists Louis-Claude Vassé and Noël Hallé (Versailles) that display his considerable gifts in rendering a vivid likeness. He exhibited four portraits at his first Salon in 1771 and sent a final portrait to the annual exhibition in 1775; apart from the Stafford ‘Turque’, almost all of his other known portraits seem to date from this brief, four-year period. After that, he turned his attention, seemingly full-time, to painting genre scenes, before ending his short career in a failed attempt to become a history painter.

Unlike ‘La Turque’, few of Aubry’s other portraits are signed but, in fact, even if the present portrait did not bear his signature, Aubry’s authorship could be immediately recognized, as the idiosyncrasies of his style are readily identified: the ruddy or tanned skin and mottled complexion; pronounced use of heavy white highlights; and strong, rather dramatic lighting are characteristics found in all of Aubry’s known portraits. Indeed, these traits reappear in the figures that enact his genre scenes of the later 1770s, such as The Shepherdess of the Alps (1775; Detroit Institute of Arts), and Farewell to the Wet Nurse (1777; Sterling and Francine Clark Art Institute, Williamstown).

Elizabeth “Mimi” Stafford was a true connoisseur and scholar of the world—a woman whose lifelong passion for ideas served as the cornerstone of a remarkable private collection. “The art of collecting is a thing that comes very naturally,” she once observed. “Each person will reach out and find that aspect of art which appeals to him….” Together with her husband, the financier Frederick M. Stafford, Mimi Stafford embarked on a decades-long journey in collecting—an inspiring pursuit of knowledge and beauty.

Born in New Orleans in 1928, Mimi Stafford epitomized the elegance and charm of a bygone era. After graduating from Tulane University’s Newcomb College, the ambitious young woman assisted U.S. High Commissioner for Germany John J. McCloy in the rebuilding efforts that followed the Second World War. It was during her travels with the State Department that she met the European-born banker Frederick M. Stafford, whom she married in Paris in 1952. In the years to come, the couple would welcome three children, John, Alex, and Alexandra Stafford. The Staffords first settled in New York City, and relocated to Paris in 1961. In Paris, Mimi Stafford focused much of her energies on civic engagement and Franco-American relations, serving as a board member of the U.S.O., the American Cathedral in Paris, and France-Amérique. Just as Mimi Stafford’s own life extended from New Orleans to New York, Paris, Palm Beach, and beyond, her collecting also reflected a diversity of experience across time and geography. Like many, her interest in art was fueled in its early stages by the joy of intellectual discovery and a curiosity toward the relics of the past.

Through personal erudition and in collaboration with curators, scholars, and artists, Mimi Stafford assembled a fine art collection that perfectly mirrored her fascination with history and beauty. It was an all-encompassing vision: in Paris, she transformed her family’s residence into an elegant recreation of an eighteenth-century French home—a strikingly authentic mise en scène she graciously opened to academics and fellow cultural patrons. In the same way that art so greatly enriched her own life, so was Mimi Stafford keen to share the wonders of her collection in the public sphere. In 1966, the Staffords lent over two hundred works to the Delgado Museum of Art—now the New Orleans Museum of Art—for the monumental exhibition Odyssey of an Art Collector. The exhibition not only sought to encourage private and institutional collecting in New Orleans, but also to introduce new audiences to art in its many forms. As Mimi Stafford noted of the works in her collection, “there is something for every taste.” James B. Byrne, then director of the Delgado Museum, wrote in the exhibition’s catalogue that, “One might view the Stafford Collection as a petit musée, which brings together enough of the richness and variety of man’s artistic endeavor, as to cause wonder and delight at his almost endless inventiveness.” In collecting, Byrne added, one “creates a self-portrait; an autobiographical statement which is unique and distinct.” For Mimi Stafford, that statement was one in which a stone Cycladic figure could instill the same sense of awe as Constantin Brancusi’s masterful La jeune fille sophistiquée (Portrait de Nancy Cunard), the latter of which her husband bought as a birthday present for her directly from the artist in 1955.

Throughout her life, Mimi Stafford provided significant financial support, bequests of fine art, and personal leadership to institutions including the New Orleans Museum of Art; the Museum of Fine Arts, Boston; the Metropolitan Museum of Art; the National Gallery of Art; the Frick Collection; the Morgan Library & Museum; the Metropolitan Opera; and Memorial Sloan Kettering Cancer Center. Even into her later years, she exuded a sense of insatiable curiosity and élan, as comfortable at a black-tie Manhattan dinner as she was traveling through the Middle East and Africa. With each new day, Mimi Stafford saw new possibilities for intellectual, spiritual, and artistic discovery—a joyous celebration of life at its fullest. In her collection of fine art, this inspiring generosity of spirit continues to resonate.