Portrait of a Blond Boy 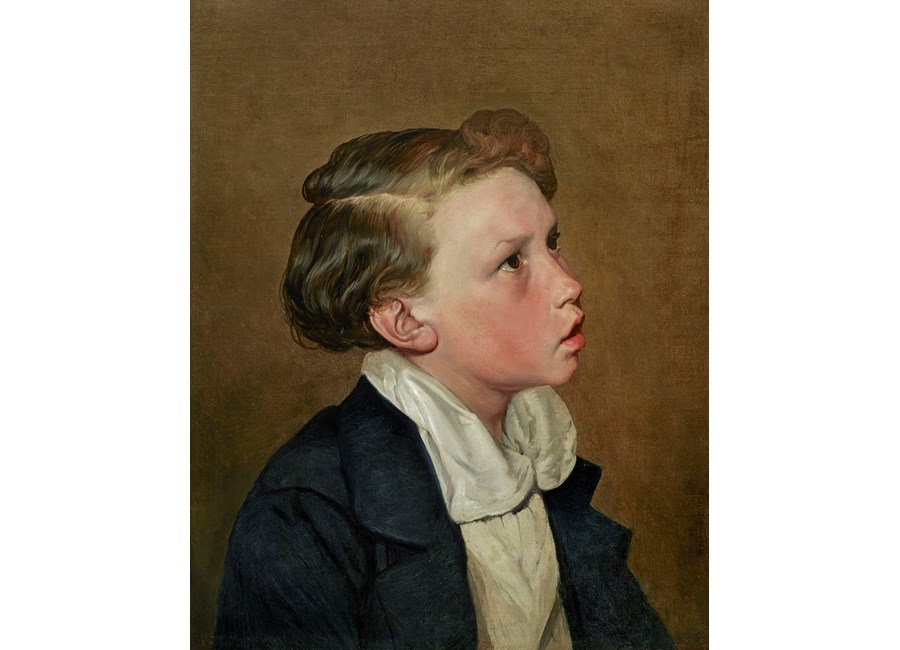 Fernand Georg Waldmüller was one of the most important Austrian painters of the Biedermeier period(1814-48). Along with artists such as Fransz Kruger, Georg Friedrich Kersting, Julius Oldach, Carl Spitzweg, Waldmuller worked in a style that evolved in the transitional period between Neoclassicism and Romanticism, as interpreted particularly in Germany, Austria, northern Italy, and the Scandinavian countries. Following the upheavals and financial difficulties arising from the Napoleonic wars, the Biedermeier style elevated the simple values of comfort and sentiment in middle-class life, striving always for realistic effect. .

In 1807 Waldmüller attended the Academy of Fine Arts Vienna. He lived in Bratislava and, in 1811, he worked as a teacher of arts for the children of Count Gyulay in Croatia. He returned to the Academy of Vienna and studied portrait painting. In 1814 he married the singer Katharina Weidner, and subsequently accompanies her on tour, working on set designs.

In 1817 he returned to Vienna and spent much time copying the works of old masters and painting portraits, genre subjects, and still-life. In 1823 he made a portrait of Ludwig van Beethoven. Waldmüller later became interested in nature and started painting landscapes, which in their loving attention to detail illustrate Waldmuller's belief that the close study of nature should be the basis of painting. These are his most notable works, in which his sense of color and knowledge of nature helped him to achieve masterly skill.

In 1819 he became professor at the Academy of Fine Arts Vienna, but was in disputes with the Viennese establishment, most notably for his comments on the system of the academy, where he wanted to establish a focus of the study on nature. His views were in opposition to the official doctrines of ideal art promulgated by the Vienna Academy, and after he had published his works on art education, he was forced to retire in 1857. By 1863 he had been accepted back into the art circles of Vienna, and was knighted in 1865.[2]


Ferdinand Georg Waldmüller was one of the most important Austrian painters of the Biedermeier period. Whether it was the conquest of the landscape and thus the convincing rendering of closeness or distance, the accurate characterization of the human face, the detailed and refined description of textures, or the depiction of rural everyday life: his works – brilliant, explanatory, moralizing, and socially critical – influenced a whole generation of artists. Being an advocate of natural observation and plein aire painting, as well as a critic of academic painting, Waldmüller was far ahead of his time

One of the leading Austrian Biedermeierpainters of the 19th century, Waldmuller embodied the style of Realismpeculiar to the middle class Biedermeier idiom. Although noted for his portrait art as well as his genre painting and still lifes, he is best remembered for his landscape painting, whose detailed naturalismperfectly illustrates the principle that close attention to nature is the foundation of realist painting.  In 1829 Waldmuller was appointed Professor of Painting at the Vienna Academy, one of the best art schoolsin Austria, but found it difficult to agree with its rather old-fashioned methods of teaching. Later, he wrote several treatises on fine art painting, outlining his more progressive approach to art education.


Ferdinand Georg Waldmüller is one of the most important representatives of the Austrian Biedermeier but leads beyond this artistic period in his realism and the complexity of his paintings. In his early years he mainly worked as a portrait painter but widend his repertoire soon and gained a leadership in all important genres. He painted portraits of famous contemporaries as Beethoven (the portrait was destroyed in World War II) and Emperor Franz I., landscapes, genre paintings and still lifes. Ferdinand Georg Waldmüller was famous during his lifetime and the enthusiasm for his paintings is still wholehearted. A statue near the townhall in Vienna, the naming of the Waldmüller park and a series of Waldmüller-stamps give an impression of the popularity of his works, which have been shown in several museum exhibitions. The Belvedere in Vienna owns the biggest collection worldwide of paintings by Ferdinand Georg Waldmüller and the Waldmüller archive.


Ferdinand Georg Waldmuller(Vienna, 1793 – Hinterbrühl, 1865) was an important Austrian portrait, genre and landscape painter of the Biedermeier period, 1814-1848. Waldmüller was particularly admired for his landscape, which exemplify his belief that art should be based on a close study of nature. Being an advocate of natural observation and plein-air painting, as well as a critic of academic painting, Waldmüller is regarded as being far ahead of his time.

Ferdinand Waldmuller began his art studies at the Vienna Academy of Fine Arts in 1807 under Hubert Maurer. After leaving the Academy in 1811, Waldmüller studied portraiture in Presburg, Hungary, and then taught drawing to the children of Count Gyulay in Croatia. In 1813 he returned to Vienna to study portraiture at the Academy. He married the singer Katharina Weidner in 1814, and consequently worked as a scenery designer and portrait painter at his wife's various engagements in Baden, Bruenn and Prague. After his return to Vienna in 1817, Waldmuller spent many hours copying Old Master paintings in Viennese collections.

In 1819, Waldmuller became a professor at the Academy, and in 1820 visited Dresden where he copied Jacob Van Ruisdael (1628-1682) and Antonio Correggio (1494-1534), and then traveled to Leipsig where he had great success with his portraits. By the time he visited Italy in 1825 Waldmuller had a flourishing portrait practice and received royal patronage with his portrait of Franz I (1827 ; Vienna, Historisches Mus.).

By now Waldmuller was gaining a reputation as the foremost landscape and genre painter in Austria. Mainly interested in the life of peasants, Waldmuller chose the scenes for his landscapes without any idealization or pretense. He elevated genre-painting to a new dimension by adding historical and religious elements without shying away from social criticism. In addition to being an observer and commentator on modern life, Waldmüller praised the health-giving qualities of rural life, and the moral virtues of family.

In 1829, he became the Curator of the Academy, and by 1835, received the title of Academic Council. In the late 1830s, because of his outspoken criticism of the Academy’s teaching methods and their permanent collection, Waldmüller fell from favor with the Vienna art establishment. As a result, he was demoted from his post as professor of painting, suspended and forced into early retirement. Despite this setback, Waldmüller remained a highly successful and sought-after artist.

In 1851, he married his second wife, 25-year-old Anna Bayer. He participated in various exhibitions, such as the world exhibition in Paris and the International Exhibition in London. In 1856, during a stay in London, he sold 31 pictures to the royal household and court. By the 1860s, he was “rehabilitated” and accepted back into the formal art community and knighted before his death in 1865.

Portrait of a Blond Boy