The Holy Family with the Infant Saint John the Baptist 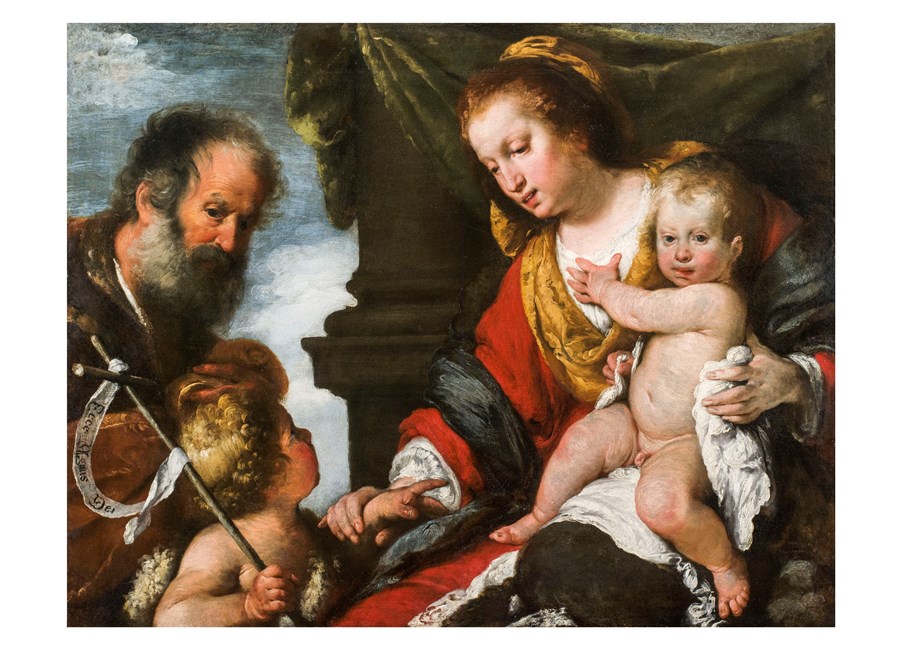 A vibrant symphony of blues, reds and whites, Bernardo Strozzi’s The Holy Familyis dated by Luisa Mortari between 1620-1632, a decade associated with the artist’s mature period, when Strozzi was working in Genoa and producing what would become some of his most celebrated work. Having made a decisive break away from the Tuscan and Lombard Mannerism that defined his earlier style, in the 1620s Strozzi embraced a more naturalistic style inspired first and foremost by Caravaggio, but also by Rubens and van Dyck, the latter of whom was residing in Genoa and was at that time Strozzi’s greatest rival.

Here, Strozzi creates a tender moment of familial intimacy informed by his keen observation of human interaction. Supported by his mother, the Christ Child looks out at the viewer while his cousin, the Infant St. John the Baptist, reaches out to touch him. In a familiar gesture of maternal vigilance, the Virgin interrupts John by gently grabbing his wrist. Yet here the Virgin’s action carries an added layer of symbolism. The young Baptist points to Christ, foreshadowing the proclamation he will make years later (made explicit on the banderole he carries), foretelling Christ’s future sacrifice for the sins of mankind as the “Lamb of God” – Mary’s expression is a mixture of sadness and joy, and she vainly resists her son’s fate, although she knows it will also bring salvation to mankind.
Scholars have often commented on the presence of “signature impasti”, thick layers of paint applied with a loaded brush in Strozzi’s paintings, and the virtuosity with which the artist varied his brushstrokes to create different textures. The exceptional quality of this technique is particularly evident in The Holy Family, where the thickly applied brushstrokes in the drapery contrast with the soft and delicate touches, particularly used for the hair and face of St. Joseph. Notably, the figure of St. Joseph appears in several other paintings and charcoal drawings by Strozzi, including the Head of a Bearded Man, executed in oil on paper and sold at Christie’s, New York, 26 January 2005, lot 293. The latter of these works was likely produced as a preparatory study specifically for our painting, and the lack of any identifying attributes such as books or words, suggests that it may have been painted from life.

Born to humble parents in Genoa in 1581, Bernardo Strozzi was a principal figure in the development of painting in 17thcentury Genoa and Venice. He trained with the Sienese painter, Pietro Sorri, before becoming Capuchin monk at the monastery at Santa Barnaba in 1598. Granted a leave from his monastic duties in 1610, Strozzi devoted himself entirely to painting in the manner of the Tuscan and Milanese Mannerists. Around 1620 he was introduced to Caravaggio’s theatrical naturalism, which he appropriated and used alongside the earlier Mannerist artifice and grace. By 1631 Strozzi was working in Venice, where he adopted a more brilliant palette in response to the paintings of Veronese. Il prete Genovese, Strozzi’s nickname in Venice, would remain an active member of La Serenissima’s artistic community until his death in 1644.

The former owner, Federico Gentili di Giuseppe (1868-1940), was an Italian collector who lived in Paris in the early 20thcentury. Over the course of his life, Federico assembled an important collection of Italian and French paintings, books, manuscripts, sculpture and objects d’art, all of which he displayed in his apartment at 22 avenue Foch. Some of his most inspired acquisitions include Giambattista Tiepolo’s, Alexander the Great and Campaspe in the studio of Apellesand Rinaldo and Armida(respectively, at the J. Paul Getty Museum, Los Angeles and the Gemäldegalerie, Berlin), El Greco’s The Holy Family with Mary Magdalen(Cleveland Museum of Art), and Romanino’s Christ Carrying the Cross(sold Christie’s, New York, 6 June 2012, lot 99). Although he died of natural causes shortly before the Nazis invaded France, several of his family members remained there and ultimately perished in concentration camps. In 1941, the collection was sold by the Vichy government in a forced sale at the hotel Drouot. Following the war, The Holy Familywas returned to France and placed on deposit at The Louvre, where it was displayed for decades until its restitution to the Gentili di Giuseppe heirs in 1999.

The Holy Family with the Infant Saint John the Baptist