Piazza San Marco in Venice, with the Basilica and Campanile 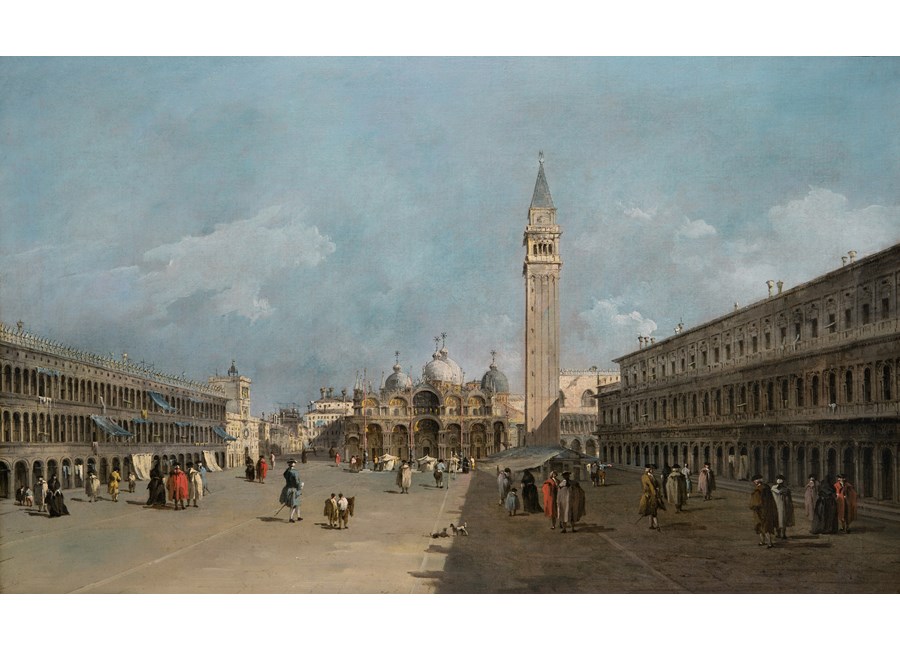 While his great predecessor Antonio Canaletto had represented Venice "crystallized in its beauty and grandeur", Francesco Guardi "focused, from the start, on atmospheric effects"; During the years of his maturity, "Guardi attained a freedom of expression and imagination, which manifests itself in spaces that are more and more illusory, and with a luminosity, sometimes silvery, sometimes warmer in tone, but painted always with a vibrant and rapid touch" (see BA Kowalczyk, Canaletto-Guardi, the two masters of Venice, exhibition catalog, Paris, Jacquemart-André Museum, 2012-2013, pp. 34-36).

St. Mark's Square, seen from San Gimignano, a church destroyed in the 19th century, was one of Guardi’s favorite subjects. Morassi lists twenty-eight variants of this marvelous representation, which gave him many opportunities to study luminous and atmospheric effects, but also enabled the depiction of the lively, often hectic life of this place which has always been the heart of the city: people bearing baskets, civil servants in red coats, casual strollers, and dogs, children and beggars. Elegantly dressed men and women with feathered hats are not here in this morning scene. They will appear in other paintings far different in mood showing the very different life on the square, occurring later in the afternoon. Here sunlight from the east creates pleasing shadows formed by the Procuratie Nuove on the square and varied scenes of daily life emphasize the calm of this lovely spring morning. Highlights of blue, red and yellow, seen in the clothing of the figures, as well as in the mosaics of the basilica and the curtains at the windows, were probably added by Guardi at the end of his work, adding tremendously to the rhythm and vibrancy of the composition.

This view, stylistically close to a painting at the National Gallery in London, was once part of a series of four works, including a View of the Rialto (formerly in San Diego, Timken Museum of Art), Salute with the Dogana (Paris, private collection), and a San Marco looking to the Lagoon with San Giorgio Maggiore and the Salute beyond (location unknown).

Morassi considers our painting to be a work of the very highest level ("di altissimo livello") and dates it to the artist’s maturity, the period in which he produced his finest work, around 1770-80.

Piazza San Marco in Venice, with the Basilica and Campanile