Portrait of The Marquis Teyssier des Farges, of Dragoon Regiment No. 12 of the French army, half-length, in uniform, wearing the Order of Saint Louis 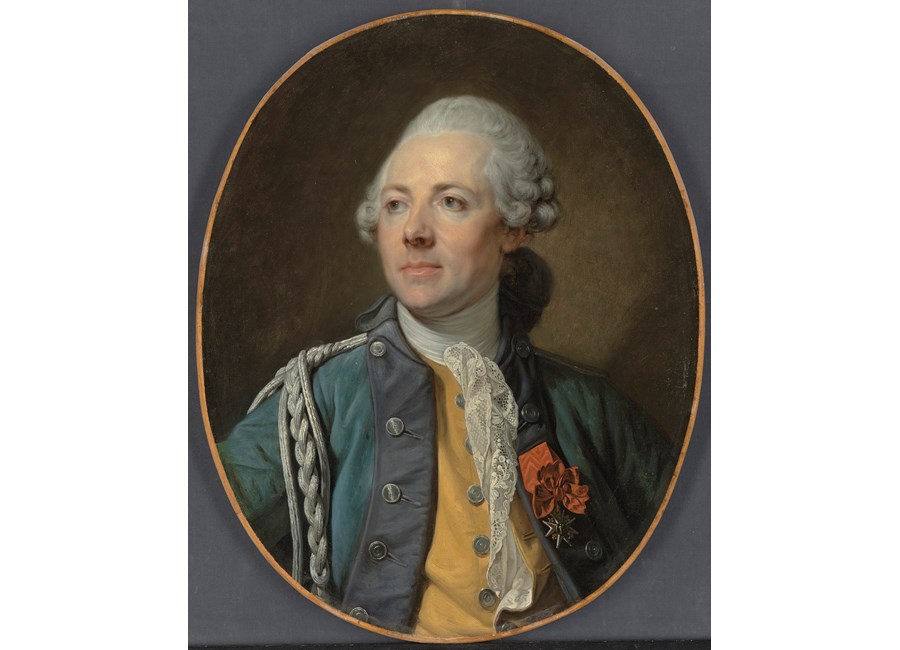 Dr. Edgar Munhall has confirmed the attribution to Jean-Baptiste Greuze on the basis of photographs. He dates the work to an early phase of the artist’s career, between 1757 and 1765, given the close similarities to other portraits of that period, particularly in the rendering of the lace. On this, Greuze advised the young portraitist Joseph Ducreux: 'nempastés jamais vos dentelles ni vos gazes' (E. de Goncourt, L’art du dix-huitième siècle, I, Paris, 1880, p. 298, n.1).

The present picture can be compared to other half-lengths by Greuze, such as the portraits of Louis Gougenot, abbé de Chezal-Benoît (Dijon, Musée des Beaux-Arts), Johann Georg Wille (Paris, Institut de France, Musée Jacquemart-André), which is signed and dated 1763, and that of George Gougenot de Croissy (Brussels, Musée des Beaux-Arts).

Andrew Cormack has identified the regiment to which the sitter belonged and dated the uniform to circa 1760-70. The sitter, Jean-Joseph-Hyacinthe Teyssier des Farges (1730-1804), was awarded the order of Saint Louis in 1763.

Jean Baptiste Greuze was born at Tournus on August 21, 1725. His early life is obscure, but he studied painting in Lyons and was in Paris by 1750, where he entered the Royal Academy as a student and worked with Charles Joseph Natoire, a prominent decorative painter. During the 1760s Greuze achieved a significant reputation with his sentimental paintings of peasants or lower-class people seen in humble surroundings and in the midst of theatrically emotional family situations; examples are The Village Bride (1761), The Father's Curse (1765), and The Prodigal Son (1765). However, he was also producing striking portraits such as the present work during these same years.

In 1769 Greuze was admitted to the academy as a genre painter. Ambitious to become a member of the academy as a history painter, which was of higher rank, he was so angered by his admission as a mere genre painter that he refused to show his paintings at the academy's exhibitions (the Salons). However, by that time he had already established a successful career as a painter of genre scenes and portraits and could afford to ignore the Salons.

The Rococo style that dominated French painting during the 18th century was aristocratic in nature, elegant, and sensuous. Stylistically it depended upon soft colors, refined textures, free brushwork, and asymmetrical compositions based upon the interplay of curved lines and masses. Produced for highly sophisticated patrons, rococo painting concentrated on aristocratic diversions, decorative portraits, mythological and allegorical themes frequently treated in a playful or erotic manner, and idyllic pastoral scenes. In contrast, Greuze's moralizing rustic dramas constituted a reaction against rococo frivolity in art; by appealing to purer emotions they were also a revolt against the emphasis placed upon reason and science by the philosophers of the Enlightenment, the intellectual movement that pervaded the first half of the 18th century. Greuze's work can be seen as part of a general cultural phenomenon that emphasized "sentiment" and appeared in novels, plays, poetry, and the philosophy of Jean Jacques Rousseau.

The rising importance of the middle class, and of middle-class morality, also played a part in the success of Greuze's work. He showed the virtues of the simple life, a "return to nature," and the honesty of unaffected emotion. The intellectuals of the day were generally opposed to the rococo as a decadent style. The strength and dignity of the officer in this portrait is a revealing example of Greuze’s approach to portraiture and emphasizes the artist’s focus on personal integrity and directness.

Somewhat ironically, Greuze's most influential champion was Denis Diderot, a leading philosopher of the Enlightenment, who saw Greuze as "the painter of virtue, the rescuer of corrupted morality." The fashion for simplicity and the "natural man" was all pervasive and engravings of Greuze's work were popular with all classes of society. His unique works were greatly admired by connoisseurs, critics and the general public throughout most of his life. His pictures were in the collections of such noted connoisseurs as Ange-Laurent de La Live de Jully, Claude-Henri Watelet and Etienne-François, Duc de Choiseul.

Portrait of The Marquis Teyssier des Farges, of Dragoon Regiment No. 12 of the French army, half-length, in uniform, wearing the Order of Saint Louis