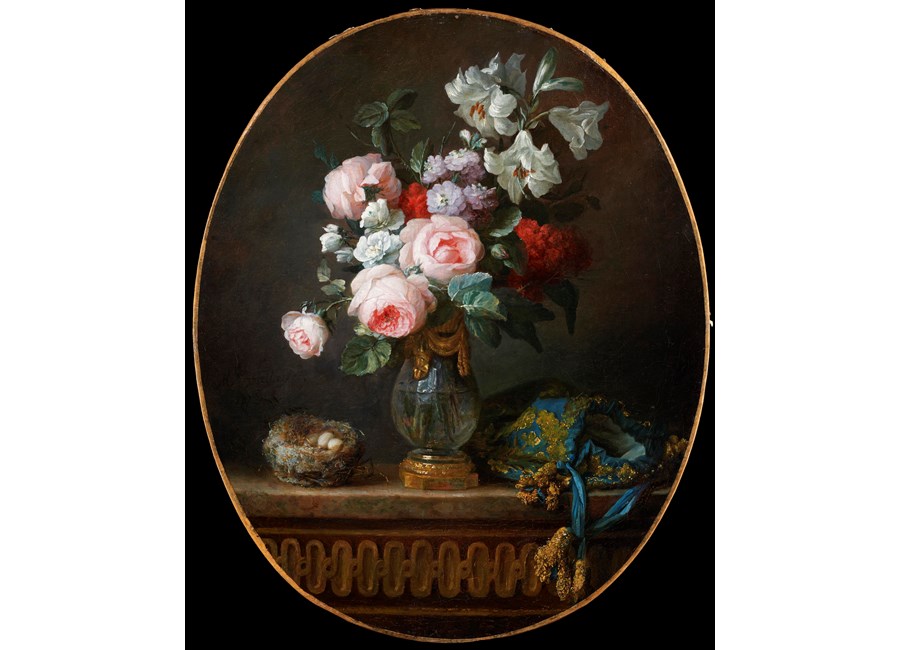 Anne Vallayer was received as an academician at the Royal Academy in 1770, specializing in still-lifes. While it was somewhat unusual for a relatively unknown female artist to be accepted, women were encouraged in the eighteenth century to follow artistic pursuits. Between 1663 and 1783 fifteen women were admitted to the Académie. However, women painters tended to concentrate on portraits and still-life painting, since they were not permitted to study from the nude, essential training for a history painter. Vallayer exhibited regularly and with great success at the annual Salons From 1771 to 1817, a year before her death. She received immediate praise from the art critics, especially Diderot. She showed her first flower paintings in 1775, and would make the genre a specialty for the remainder of her career. She was clearly the most important French still-life painter at the end of the century, carrying on the tradition developed by Desportes, Oudry, and Chardin.

In 1781 Anne Vallayer married Jean‑Pierre-Sylvestre Coster, a wealthy lawyer and member of Parliament, and thereafter she linked both surnames in her signed works. It is therefore clear that this painting was created prior to her marriage.

Anne Vallayer‑Coster, along with Adelaide Labille-Guiard and Elisabeth Louise Vigee‑Lebrun were seen by their contemporaries and are viewed today as the most famous female painters in eighteenth‑century France. It is not known precisely with whom Vallayer‑Coster trained, but her signed and dated paintings of the mid 1760s indicate that she was in full command of her talents by then. Her father had been a goldsmith who worked for the Gobelins tapestry manufactory, and may have been her first teacher. While growing up she had clearly became familiar with all the artistic activities of the Gobelins factory and in her maturity often provided designs for them.

The present still-life is typical of her most refined and delicate works. In addition to this kind of flower-piece, she also painted still-lifes of the hunt, of vegetables and fruits, and of table settings, and is known to have painted over fifty portraits.

As was true for so many artists, who had been associated with the Court, the advent of the revolution complicated her life. Vallayer-Coster retired to Villemomble-en-Montreuil. But later, during the Directoire, she again exhibited when the Salons were revived.