A Youth Playing the Violin 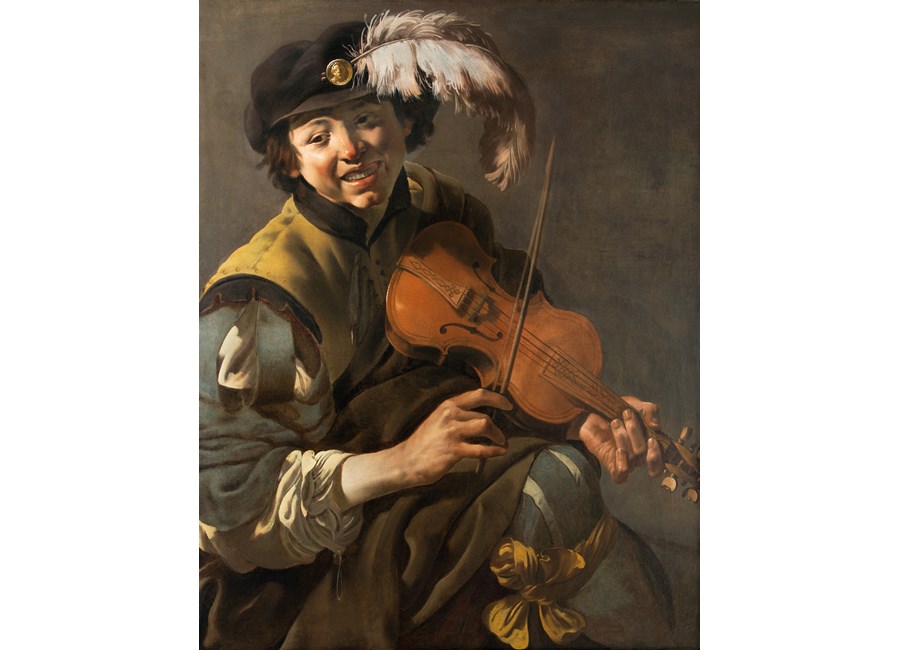 Born into a Catholic family in Deventer, Ter Brugghen apprenticed in Utrecht under Abraham Bloemaert before setting off for Italy around the age of 16. Little is known of his time in Italy: he seems to have remained there for close to ten years--he was recorded back in Utrecht in April 1615--but no known works can be securely attributed to his Italian sojourn. He was reported to have met the great Flemish master Peter Paul Rubens in Rome around 1606/08 (Rubens returned the honor by visiting Ter Brugghen in Utrecht in 1627), and is recorded in Milan in 1614, having stopped there on his way to the Netherlands. A second visit to Italy, probably to Genoa, has sometimes been posited by scholars; if Ter Brugghen did return there in 1620/21 as speculated, he would have encountered, probably for the first time, works by Simon Vouet and Orazio Gentileschi that would certainly have left their mark on the creation of the present Youth Playing the Violin.

The greatest impact made on the young Ter Brugghen by his years in Italy was, unquestionably, his exposure to the paintings of Caravaggio and the earliest of his followers, such as the Frenchmen, Valentin de Boulogne and Vouet, who were working in Rome at the same time. Of all of the northern followers of Caravaggio, Ter Brugghen was the most original and creative, and among the first to depart Rome and return to his homeland, bringing the influence of the master with him. He was deeply impressed by Caravaggio's revolutionary naturalism, chiaroscuro and dramatic lighting effects, which he soon incorporated into his own works. But Ter Brugghen was also drawn to aspects of Caravaggio's preferred subject matter, in particular the life-sized, half-length cardsharps and fortune tellers and such, the bravi dressed flamboyantly in tightly cut jerkins, silk ribbons and extravagantly plumed caps who appeared in Caravaggio's masterpieces of the 1590s that were available to Ter Brugghen for study in Roman private collections. The return from Rome to Utrecht in 1620 of two fellow Caravaggisti - Gerrit van Honthorst (1592-1656) and Dirck van Baburen (c.1595-1624) - helped to further deepen Ter Brugghen's embrace of Caravaggio's style and transform his paintings and those of the whole Utrecht School with the introduction of the very latest Italian Caravaggesque ideas.

In 1621, Ter Brugghen painted a beautiful pair of music-making figures, The Flute Player and The Fife Player (both, Gemäldegalerie Alte Meister, Kassel) that were the first for him in this new genre, marking, as Leonard Slatkes and Wayne Franits observed, "ter Brugghen's entrance into the world of Dutch Caravaggism as it developed after the summer of 1620 when van Honthorst, and presumably Van Baburen, returned from Rome." As Slatkes and Franits further note, "There is little doubt that from 1621 on, the single-figured musician quickly became one of the most popular themes among the Utrecht Caravaggisti." Ter Brugghen subsequently made a specialty in the 1620s of drinkers, soldiers and musicians, often dressed in the flamboyantly theatrical costume generally referred to as 'Burgundian,' and depicted making music, singing or just carousing. Several of these paintings exist in multiple versions, both autograph and from Ter Brugghen's workshop.

Wearing a cap ornamented with an extravagant ostrich feather fastened to it with a medallion, the jolly violinist in the present painting strokes the bow across his instrument. His costume--with its slash-sleeved jerkin and breeches gartered below the knee with yellow silk bows--is certainly not 17th-century street dress, but rather the theatrical 'Burgundian' style adopted from Caravaggio. However, in isolating the figure against a neutral brown background and removing him from the larger context that Caravaggio would have supplied, Ter Brugghen transforms his violinist into an emblem of pure, uninhibited and infectious merriment.

The Hascoe Youth Playing the Violin is fully signed and dated 1626, as is another, almost identical version of the subject in the Dayton Art Institute (Dayton, Ohio). Both are of superb quality and the authenticity of each has never been questioned. It has long been noted, however - by Nicholson, Sutton, Slatkes and others - that whereas the Hascoe painting is full of pentimenti, both significant and minor, the Dayton picture reveals no changes of mind on the artist's part and must certainly represent a second version of the composition, probably executed immediately after the present, primary version was completed.

Further evidence of the primacy of the Hascoe painting came in 1929, when Glück published the first x-rays of the painting which reveal that beneath the present violinist is another composition by Ter Brugghen of a bagpipe player in profile that exists in several versions, the earliest and finest of which is dated 1624 (National Gallery of Art, Washington, fig. 1). As a result, Nicholson surmised the following chronology for the series of works: first, The Bagpipe Player in Washington was painted in 1624; next came the replica of The Bagpipe Player that appears beneath the visible layer of the present painting (fig. 2); then, the present Youth Playing the Violin which was painted two years later over the 'hidden' replica; and finally, the Dayton version of Youth Playing the Violin which was executed immediately after the Hascoe painting, also in 1626. Another version of The Bagpipe Player, from the workshop of the artist, is in the Sarah Campbell Blaffer Foundation at the Museum of Fine Arts, Houston, and it is probable that it was a similar studio replica of The Bagpipe Player that Ter Brugghen repurposed when he painted the present version of the violinist. Slatkes and Franits note that "the fact that the composition has been painted over what must have been, at the very least, a workshop replica of ter Bruggen's Bagpipe Player provides us with some insight on how a studio like ter Brugghen operated. Obviously, replicas like the one beneath this picture were made on speculation and kept in the studio for a certain amount of time--in this case about two years--and then painted over with something more up-to-date, or popular."

Slatkes and Franits also note that Ter Brugghen employed smalt in the violinist's stockings to make them blue, a color which is now degraded. With the end of the Twelve Years Truce in 1621 and the subsequent resumption of hostilities, ultramarine blue was difficult to obtain and Ter Brugghen was forced to use the less desirable smalt in its stead; the same smalt decay can be found in the Dayton replica of the composition, as well as in the Crucifixion with the Virgin and St. John (c. 1622; Metropolitan Museum of Art, New York) and Saint Sebastian Tended by Irene (1625; Allen Memorial Art Museum, Oberlin College).

A Youth Playing the Violin