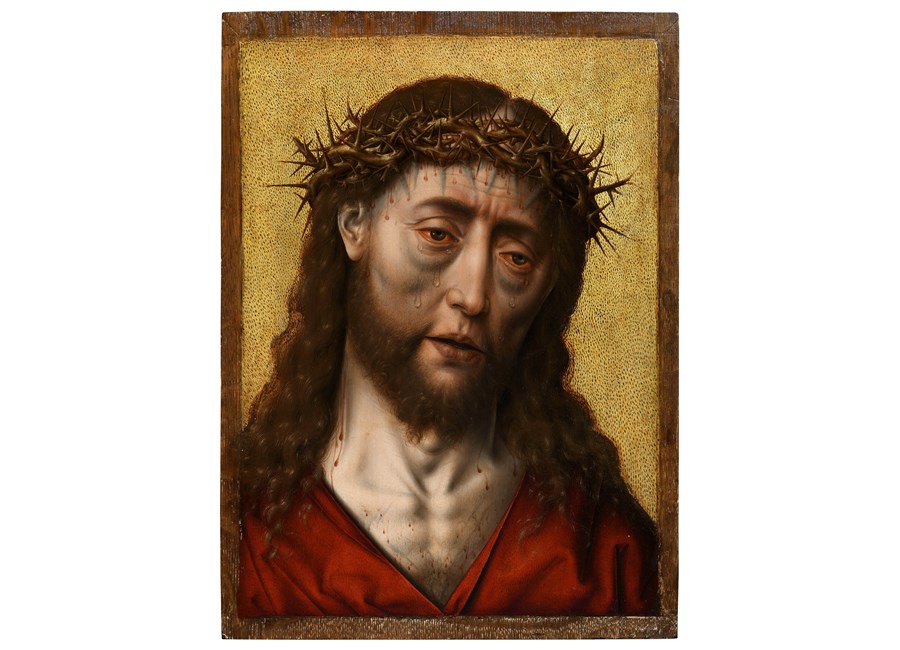 This extraordinary image of Christ crowned with thorns during the Passion represents the increased spirituality and desire for salvation which permeated Europe in the century following the Black Death. Its small scale indicates that it was undoubtedly intended for private devotional use; its owner’s meditation upon the Passion, in hope of finding the path to their own salvation, being enhanced by contemplation of the bloodshot eyes, streaming tears and rivulets of blood, all represented in intense, lifelike detail.

This is one of several variants upon the theme of the suffering Christ developed by Albrecht Bouts in response to a growing demand for devotional images. This is probably the first of a series of five closely related representations of Christ crowned with thorns, in which the Saviour is depicted bust length in the scarlet robes and crown of thorns with which he was dressed by Pilate’s soldiers in prelude to his mocking (Matthew 27: 27–31). He is shown sometimes with his hands opened in prayer or benediction, displaying his wounds or, as Ecce Homo, holding the rod with which he was beaten. Their remarkable detail permitted the individual to emulate Christ by identifying with his life and sufferings in accordance with the teachings of the Devotio Moderna.  In many cases, these images of the suffering Christ were accompanied, in the form of a diptych, by a companion panel depicting the Mater Dolorosa or mourning Virgin, such as those now in the Musée National de Luxembourg,  and the Suermondt-Ludwig-Museum, Aachen, through which the pious viewer could further enjoin the help of Christ’s Mother as intercessor for their salvation. As no such pair incorporating this particular type has survived, it is possible that it was always intended a single devotional image in its own right. The prototype is generally acknowledged to be the panel in the Musée des Beaux-Arts in Dijon, painted around 1495.

The remarkable state of preservation of the paint surface, with only very minor blemishes and a resultant lack of craquelure in many areas, has led to speculation that the painting was in fact painted upon paper or vellum. This is a rare method of production but one used by several artists in this period, a notable example being the Christ Crowned with Thorns by Petrus Christus of about 1445 now in the Metropolitan Museum of Art in New York which is on parchment.