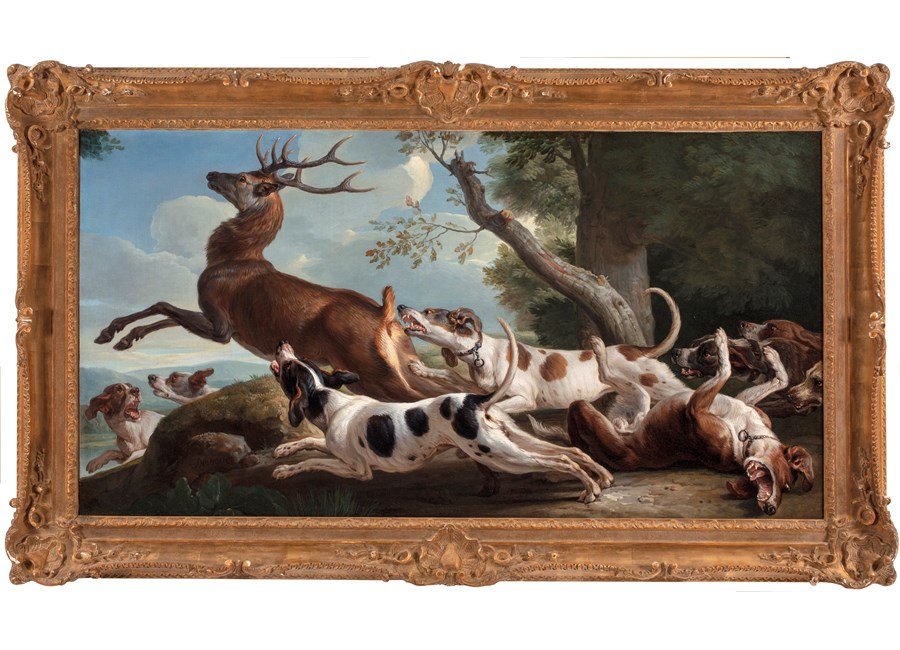 The composition of this impressive stag hunt is similar to a work on paper by Desportes and a preparatory for an important commission from the Grand Dauphin for his Château at Meudon. However, if the final painting from the Château de Meudon1, now in the collections of the Besançon Museum of Fine Arts, France, is of the same sentiment as ours, it is nevertheless in a height-wise format. Realized in 1702 for the Grand Dauphin, this dynamic scene of stag pursuit must have pleased the painter, since he seemed to have reemployed a few variants thereafter. Thus, a composition was discovered during the auction of the Louis Grandchamp des Raux collection in March 2015 in Paris, similar to the presented work2. They comparably reveal a stag attacked by dogs in a length-wise format and with the same dimensions as our canvas, before ours was elongated. Indeed, if our canvas was fully realized by Desportes in its central part, and even signed by him in the same place as on that of the 2015 auction, one clearly perceives the enlargements by the studio, probably to meet the client’s need to integrate the paintings in a decor. The palette is quite akin. The stroke remaining delicate in the enlarged section obviously suggests that the maneuver was actually contemporary, and by the studio, which came closest to this middle part entirely by the master and in this beautiful workmanship during his full maturity.