THE NURTURE OF JUPITER 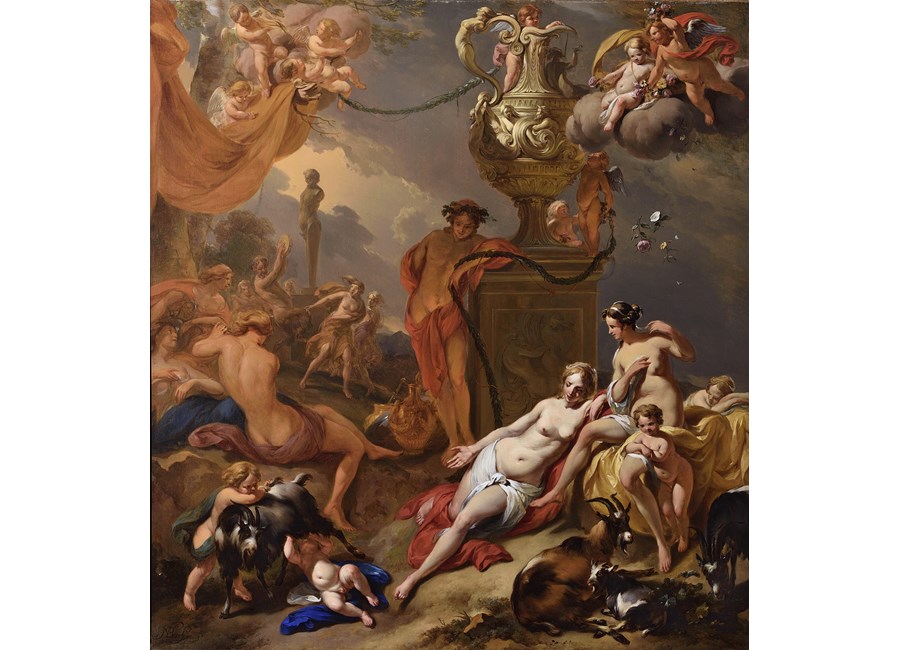 In the catalogue of the exhibition Nicolaes Berchem in the light of Italy which was held in The Netherlands in 2006-2007, nearly all of his masterpieces with provenances dating back to the 18th century, were recorded in France. The Nurture of Jupiter is a good example of this tradition of appeal to the French taste. The painting belonged to the painter Joseph Aved, the famous portraitist under Louis XV and himself of Dutch origin as is revealed by his nickname 'The Batavian'. The painting was included in the sale in 1766 after his death, which also featured several works by Chardin who was Aved's best friend. In this sale, there were also paintings by Rembrandt, Adriaen van Ostade and Gerrit Dou. The present painting was also in another famous collection of French and Dutch paintings, that of the businessman Van Parys, whose sale took place in Brussels in 1853. The masterpiece of the sale was the Portrait d'Hélène Fourment by Peter Paul Rubens, but the painting by Berchem was also seen to be quite important and had a long catalogue entry. It read: 'Saturn, because of his treaty with Titan, his brother, was determined to kill all of his newborn male babies, and would devour them without pity to keep his promise; Cybele who was about to give birth retired to the island of Crete where she carefully hid her newborn son; she had him raised by two nymphs and recommended him to the Corybantes. To the left of this major composition is the goat Amaltea who is nursing Jupiter lying on the ground on a blue drapery. To the right, his mother gazes at him with love. She is half lying near a group of nymphs and small children; in front of her are two goats and a kid. In the back, the Corybantes dance and make noise so that Saturn wouldn't hear the cries of the young god. The gondola which left Cybele on Crete can be seen in the background. To the right, putti in the clouds throw flowers, to the left putti attach a garland and pick up a drapery with large pleats. A large vase sculpted on a pedestal and various accessories rendered with great finesse decorate this colorful composition. Works of this master in this genre are rare and sough-after.' During the 1660s Berchem was at the peak of his career. The Nurture of Jupiter is characteristic of this period, and it seems reasonable to date the work to the middle of that decade. His figures become bigger and predominate over the landscape. The artist took special care in depicting the alluring grace of these feminine faces, the elegance of their bodies, and the beauty of the fabrics which cover them. Berchem also emphasized the statues, urns, and columns in order to create an enchanting atmosphere, a décor on which light falls. Light, which glitters on the stones and reveals form, has a major role, similar to a lightening bolt that would shine on an opera stage. In the Nurture of Jupiter, a monumental urn, a bust of Priapus, and a baroque curtain seem elements of a theater stage. The palette is in itself typical of the artist, with the three primary colors of yellow, red, and blue complementing each other. His signature, so beautifully inscribed shows the great pride the artist took in completing this painting. The Nurture of Jupiter can be considered a true masterpiece by Nicolaes Berchem, one that until quite recently has been held in private hands.

In May 1642, Berchem was received into the Haarlem guild. He was then painting mostly idealized countryside`s with shepherds or travelers. In the beginning of the 1650`s, a probable trip to Italy was essential for him as it brought to his work the southern luminosity, more freedom, and a wider range of subjects. Allegory, mythology and genre scenes from then on would become more frequent in his oeuvre. During this period, his works became larger, brighter, and showed the influence of the immense decorations of the Italian `grand style`. The 1650`s were pivotal for the developing career of the artist.    Although deeply influenced by the great landscape painters of his time such as Van Goyen, Ruisdael, Jan Asselijn and Jan Both, he soon found his own style. He moved from traditional horizontal compositions to vertical or square formats that were seen as more `decorative`. After 1655, Berchem painted numerous scenes representing ports, similar to his contemporary Jan Baptist Weenix, and was one of the pioneers of a refined aristocratic painting which corresponded with the taste of the rich Dutch middle class.  Berchem was back in Haarlem in 1653 and stayed there until 1660, when an economic crisis forced him to settle in the capital, the richest city in the country. He stayed in Amsterdam until 1670, but ended his life in his native city of Haarlem.    Nicolaes Berchem is one of the most important Dutch artists and the most influenced by the Italian style. He is without a doubt extremely versatile and was extremely productive: five hundred drawings, more than six hundred paintings and fifty etchings that carry his signature. For the most part, his work depicts Italian landscapess with shepherds and domestic animals. During the 17th and 18th centuries, many engravings were reproduced after paintings by Berchem.  His work became very popular and sought-after by important collectors, especially in France. Crozat, Marigny, Louis XV and Louis XVI were ardent admirers of his work and the prices for his paintings went tremendously high in the middle of the 18th century. It is likely that the sense of décor, the elegance of the mise en scène, the use of light to model volumes and spaces as well as the balanced and appealing palette found a particular echo in French art. Berchem found a welcoming reception in France, which is illustrated by the comment of the painter Jean-Baptiste Oudry about him: "one of the paintings by this brilliant artist could be an entire class of practice." (J.B. Oudry, Discours sur la pratique de la peinture adressé à l`Académie,  December, 2, 1752). The collector and critic Dezallier d`Argenville affirms a few years later: "nothing is more sought-after today than the paintings of Nicolaes Berchem".

THE NURTURE OF JUPITER