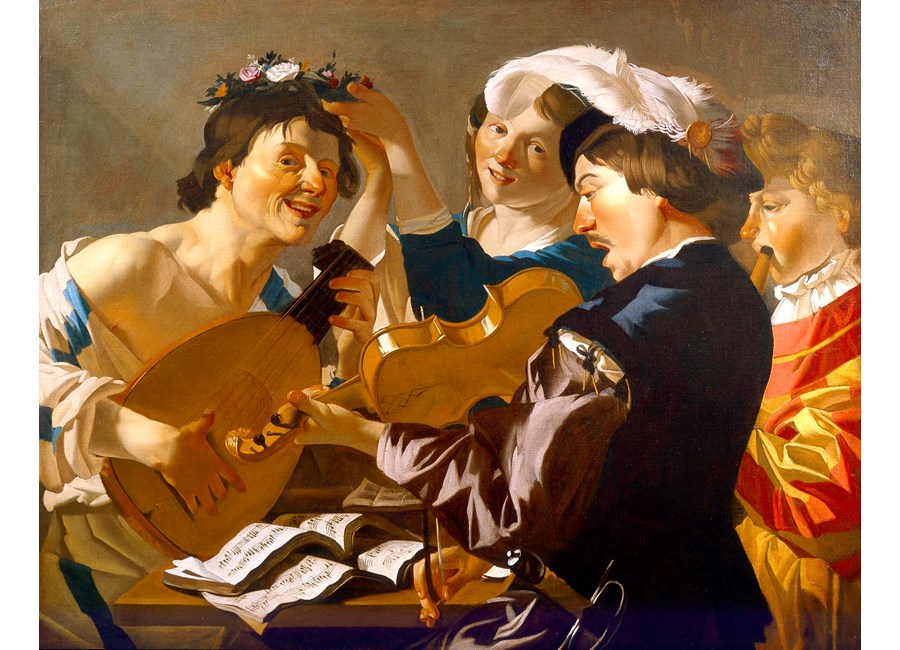 Dirck van Baburen was the youngest member of the so-called Utrecht Caravaggisti, a group of artists all hailing from the city of Utrecht or its environs, who were inspired by the work of the famed Italian painter, Caravaggio (1571-1610). Around 1607, Van Baburen entered the studio of Paulus Moreelse (1571-1638), an important Utrecht painter who primarily specialized in portraiture. In this studio the fledgling artist probably received his first, albeit indirect, exposure to elements of Caravaggio’s style which were already trickling north during the first decade of the new century. After a four-year apprenticeship with Moreelse, Van Baburen departed for Italy shortly after 1611; he would remain there, headquartered in Rome, until roughly the summer of 1620. Caravaggio was already deceased by the time Van Baburen arrived in the eternal city. Nevertheless, his Italian period work attests to his familiarity with the celebrated master’s art. Moreover, Van Baburen was likely friendly with one of Caravaggio’s most influential devotees, the enigmatic Lombard painter Bartolomeo Manfredi (1582-1622). Manfredi and Van Baburen were recorded in 1619 as living in the same parish in Rome. Manfredi’s interpretations of Caravaggio’s are profoundly affected Van Baburen as well as other members of the Utrecht Caravaggisti.

Van Baburen’s output during his Italian sojourn is comprised almost entirely of religious paintings, some of which were executed for Rome’s most prominent churches. It was only upon his return to Utrecht in late 1620 that he began to make genre paintings. That Van Baburen managed to introduce a series of stylistic and thematic innovations into the repertoire of Dutch genre painting is all the more remarkable considering his untimely death just four years later. Many of Van Baburen’s innovations were adopted by his fellow Utrecht Caravaggist, Hendrick ter Brugghen (1588-1629), with whom he probably shared a very busy workshop.

I first inspected The Concert in 2003, at a restorer’s studio. The painting was fairly dirty when I inspected it, and the lighting conditions were poor. At that time, I believed it to be a previously unknown studio replica of high quality, with some intervention by Van Baburen himself (most notably in the violinist), of a well known painting now in the Hermitage in St. Petersburg, which I last saw back in 1982 (cf. Leonard J. Slatkes, Dirck van Baburen (ca. 1595-1624); A Dutch Painter in Utrecht and Rome, Utrecht 1965, cat. No. A26). Moreover, the painting contained an additional strip of canvas, running the entire length of the lower area of the composition; it had been folded under for a substantial period of time, perhaps to make it more closely resemble the Hermitage version. I was convinced that the painting allowed us to see what the Hermitage version must have originally looked like before it was presumably cut down.

I saw the painting for a second time in July 2008. In the interim, it had been cleaned. As a result, I have altered my opinion to such an extent that I now believe that this is actually the prime version. And that the Hermitage version, which has been in that collection since the eighteenth century, is a second autograph version – so technically a replica by Baburen himself. The added strip of canvas, mentioned above, proved to be a later addition and was thus removed when the painting was cleaned. So, its size now corresponds closely to that of the Hermitage version. I will include this version in my forthcoming monograph on Baburen, in addition to the Hermitage version.

Both versions date from roughly 1623, at a time when Baburen was likely operating a joint studio with his Utrecht colleague, Hendrick ter Brugghen. Van Baburen’s and Ter Brugghen’s joint studio routinely produced prime versions and replicas of specific compositions, which indicates just how popular their work was at the time. The Williams version features numerous pentimenti that reveal much about the artist’s working process – there is even a small area in the upper right of the canvas that Baburen used to wipe off his brushes. By contrast, the Hermitage version contains no pentimenti. Clearly the Williams version was meant as a sort of modello, not only for the Hermitage painting but presumably for copies by assistants that are now lost.

Both versions reveal the influence of Manfredi, who helped to popularize this type of subject. Van Baburen, in turn, introduced it, along with other musical themes, into the repertoire of the Utrecht Caravaggisti.