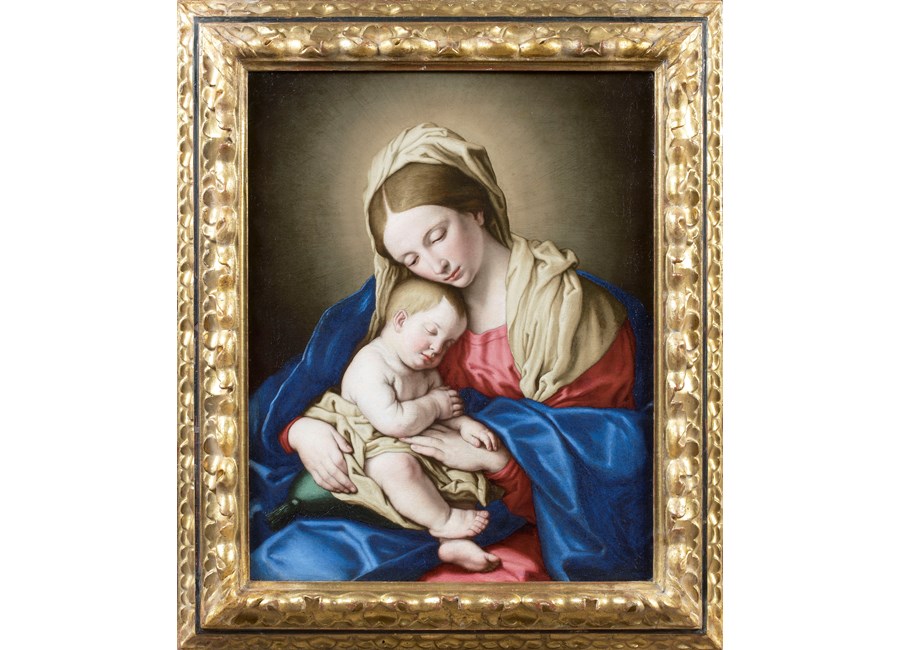 Sassoferrato's reputation in 17th century art is built almost entirely on his paintings of the Madonna, executed with a remarkable simplicity of color and composition, almost entirely without background scenery or reference to Baroque or Classical forms. His genius lay in capturing a vision of the Madonna of such exquisite beauty and devotion that set him apart from any other contemporaries. The same face appears with little variation in the major part of his tiny output and was to be imitated by successive generations of painters.

Giovanni Battista Salvi was born in Sassoferrato in 1609. His father was a local painter named Tarquinio, with whom he received his first training. As a young man he must have travelled to areas bordering the Marches, such as Umbria and Perugia, where beginning in 1630 he was employed by the Benedictine Convent of S. Pietro for which he produced a series of ten saints for the ceiling of the sacristy of their church. Though clearly influenced by other artists from the Bologna school, such as Guido Reni and Guercino, tradition holds that he studied in Rome and in Naples with Dominichino, who had left Rome for Naples in 1631. To that master he owes the pronounced clarity, refinement and idealized beauty that influenced his very individualistic style.

The first documentary evidence of Sassoferrato’s presence in Rome, does not come until 1641, when he executed a painting for the Church of San Francesca di Paola. The following year, Princess Pamphili di Rossano commissioned him to paint one of his best known paintings, Our Lady of the Rosary, for the Church of Santa Sabina. At the time of his marriage, in 1648, he was living in the Roman parish of San Salvatore ai Monti, the artists' quarter, but for the next thirty years there is no further documentary record of his whereabouts, nor are any of his paintings signed or dated.

Presumably during this time he worked at producing the many images of the Virgin for which he became famous. The vogue for such images, stimulated by the Marian cult fostered by the Counter-Reformation, obliged him to paint them in quantity and to keep a reserve stock to meet the ever-increasing demand. Despite the great number of such images, each one reveals a consistently high quality of execution. In each work he demonstrates his painstaking craftsmanship and skillful use of brilliant color.

In the present painting, the Virgin is cradling the sleeping Christ Child tenderly in her arms. With his rosy cheeks and plump arms and legs, the Christ Child appears as a typical, healthy baby. Mary is shown as a radiant young mother. This image endows the Virgin and Child with human qualities and celebrates the natural maternal bond between mother and infant. This bond is emphasized by the manner in which Mary embraces Jesus, resting her cheek on his head. Here the coloration is simple yet brilliantly vibrant.
The rich, warm golds and pinks, and the soothing blue of Mary's shawl lend peace and tranquility to the composition. Sassoferrato's clean, crisp lines, exemplified by the finely executed folds of drapery, reveal his command of classical Baroque painting techniques. Such painstaking craftsmanship contributed to his renown.