"A Portrait of Auguste Vestris, half length, wearing a Grey Coat and a Fur Hat" 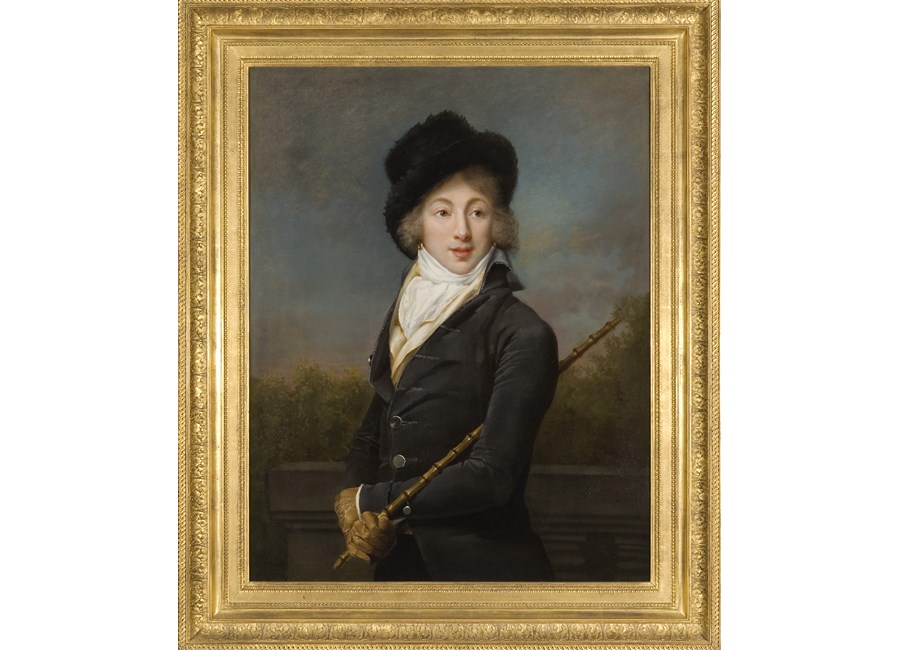 The sitter of this portrait, Marie-Jean-Augustin Vestris, called Auguste Vestris (1760-1842), was known as le dieu de la danse (The god of dance). He was a member of a famous Italian-French family of dancers that originated in Florence. Vestris has become a name identified with the art of dance much as that of Mozart as become identified with that of music. Auguste’s father, Gaetano Apolline Baldassare Vestris, was one of the greatest dancers of the 18th century. He studied at the Royal Academy in Paris with Louis Dupré and made his debut with the Opera in 1748. He was appointed Premier danseur in 1751 and served as dancing master to Louis XVI. It is said that he was the first dancer to discard the mask and to use his face in mime.

Gaetano fathered his famous son, Auguste, with his mistress, Marie Allard, also a dancer, who excelled in comic and character roles, making her debut in Marseilles. She danced in Lyon and performed at the Paris Opera from 1761 to 1782.

The young Auguste trained with his famous father and was at first called Vestr’Allard. Making his debut at age 12 in a divertissement “La Cinquanaine” in 1772, his precocious talent was immediately recognized as extraordinary. He became a soloist in 1776 and Premier danseur in 1778, a position he held for 35 years. Auguste danced in the first production of Noverre’s and Mozart’s “Les Petits Riens” and was the favorite male dancer in Gardel’s ballets from 1781-87. Like his father, Auguste was quite conceited, and although he was not a tall man, he was able to execute sensational elevations and danced with such dazzling virtuosity that he was soon recognized as Europe’s greatest dancer. His astounding elasticity and speed combined with his expressive countenance and lively spirit made him well suited to the emotional character roles he took. In reality he created a new genre of dance. He developed a talent for impressionistic mimicry that was recognized by the great actors of the day, and his performance of the Prodigal Son in particular is said to have been a true masterpiece.

After the French Revolution Gaetano and Auguste fled to London. Vestris senior danced at the King’s Therare in the 1780-81 season, and was acknowledged by all to be the most celebrated dancer in Europe at the time. On December 16, 1780 the younger Vestris also made his triumphant debut on the London stage at the King’s Theatre, where he performed a serious ballet, Ricimero and Les Amas Surpris. Of the performance Horace Walpole wrote:

The theatre was brimful in expectation of Vestris. At the end of the second act [of Ricimero] he appeared; but with so much grace, agility and strength, that the whole audience fell into convulsions of applause: the men thundered, the ladies forgetting their delicacy and weakness, clapped with such vehemence, that seventeen broke their arms, sixty-nine sprained their wrists, and three cried bravo! Bravissimo! so rashly, that they have not been able to utter so much as no since.

In the weeks and months that followed the Vestrises took the London stage by storm. On February 22, 1781, on the night of Auguste’s benefit performance, the House of Commons adjourned especially so that the members could be present.

The following comment was also made of his brilliance as a dancer, “I also saw… in 1782, young Vestris, who owed his celebrity to springing very high, coming down on one toe, and turning round upon it very slowly, while the other leg was stretched horizontally: he was about twenty years of age, and wore light blue, which became a fashion, and was called Vestris blue”.

Auguste returned to the stage in Paris in 1793, and after his retirement successfully trained many notable dancers, including Didelot, Perrot, Bournonville, Fanny Elssler and Marie Taglioni, with whom he danced a minuet at age 75.

The present portrait was painted the year Vestris returned to Paris. The likeness may be compared to a portrait of Vestris by Gainsborough in Tate Britain, London (see "Thomas Gainsborough's 'Lost' Portrait of Auguste Vestris", in The British Art Journal, Spring 2003, vol. IV, no. 1, pp. 64-68).

The painter of the portrait, Adèle de Romance, nee Marie-Jeanne Mercier, was born in Paris in 1769. She was the natural daughter of Hugues-Étienne, Marquis of Romance-Mesmon, a Captain of the Guard, and a married woman, Jeanne-Marie-Bernadine Mercier. She adopted the name of Adèle de Romance when she was legitimated by her father at the age of nine. In 1790 she married the miniaturist François Antoine Romany, but the union ended in divorce in 1796.

Adèle de Romany is believed to have studied with Jean-Baptiste Regnault, who had a studio for women pupils that was supervised by his wife. She participated in the Paris Salons for forty years from 1793 to 1833, where she used several variations of her maiden and married names when exhibiting, including de Romance, Romany, Romany-de-Romance, and De Romance Romany. She was almost exclusively a portraitist, although she did paint a few mythological and genre scenes. She is best known for her portraits of actors and actresses, and by far the largest collection of her works is to be found at the Comédie-Français. Besides her activity as an artist, de Romance was successfully engaged in various financial activities during the Revolution, Consulate, and Directory. She purchased a house and used the mortgage as security to obtain loans, apparently using the funds to finance numerous other speculations. On her death on June 7, 1846 her estate was valued at over 8000 francs.

"A Portrait of Auguste Vestris, half length, wearing a Grey Coat and a Fur Hat"