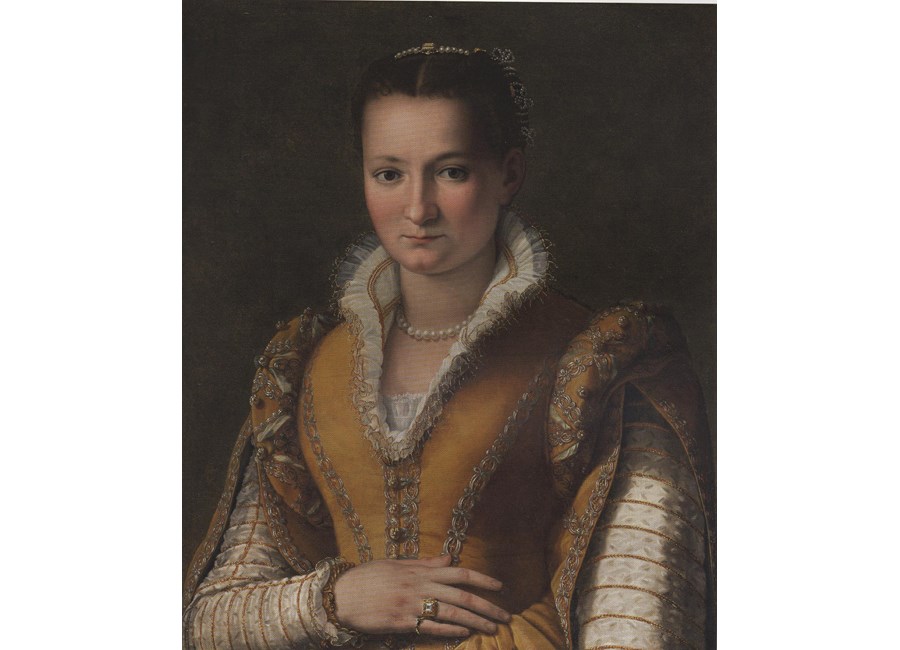 The sitter in this portrait, so sumptuously dressed in a golden gown embellished with embroidery and pearls, as been identified as Bianca Capello de’Medici, a member of a Venetian noble family. Although her parents forbade it, Bianca eloped at age seventeen with Piero Buonaventura, a bell-born yet impoverished Florentine suitor. Her family chased the couple, even putting a bounty of 2,000 ducats on Piero’s head. However, the lovers escaped to Florence where they lived several years in poverty. According to legend, Bianca was hanging up washing when her great beauty attracted the attention of Francesco de’Medici, the eldest son of the Grand Duke of Tuscany. Attempting to get closer to Bianca, Francesco elevated Piero to a prestigious position in public office where his pride made him many enemies. He was conveniently murdered soon thereafter. Bianca then became Francesco’s mistress, and his devotion remained unwavering even after his marriage to Joanna, daughter of Emperor Ferdinand of Austria in 1574. When Joanna died in 1578, Bianca and Francesco, now a Grand Duke, were married. They died in 1587 following a banquet at which it is suggested they might have been poisoned.

Alesandro Allori was the pupil and adopted son of Agnolo Bronzino, court artist to Cosimo I de’Medici and the leading painter in Florence in the middle of the sixteenth century. Allori’s earliest works, among them a decorative cycle commemorating the marriage of Francesco de’Medici and Joanna of Austria, were strongly influenced by his studies of Michelangelo and antique statuary. According to Simona Lecchini Giovannoni the present work dates to somewhat later in Allori’s career. She notes that the softening of technique and an increased attention to facial detail mark a departure from Bronzino, which became increasingly evident in his work of the 1580s. She compares the portrait to Allori’s Portrait of the Magdalene, presently unlocated.