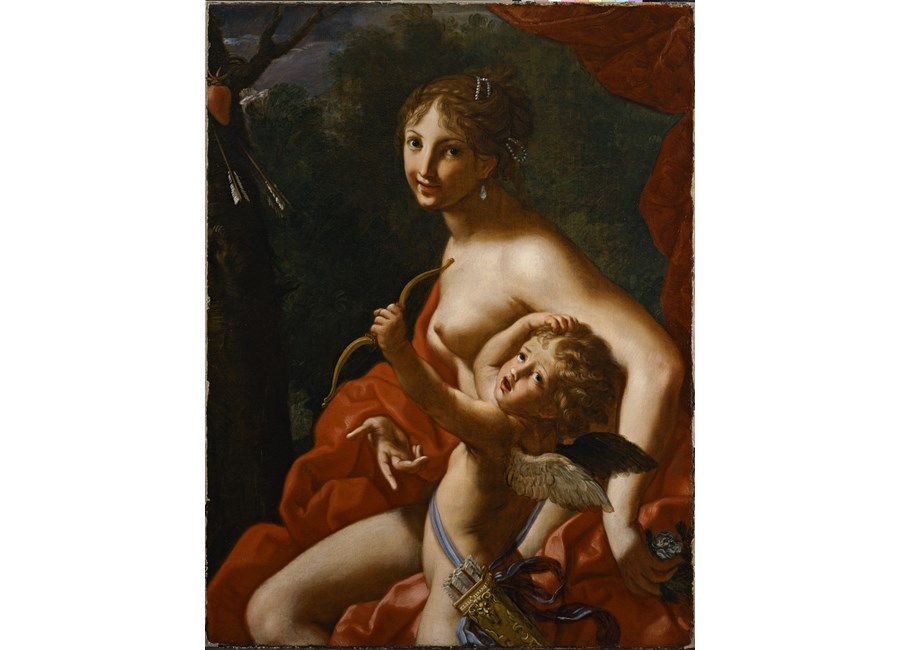 Even in seventeenth-century Bologna, which was well known for its intellectual
and artistic women, the talent of Elisabetta Sirani was considered unusual. Her international fame and prodigious output helped to make her a living legend, while the mysterious circumstances surrounding her death at the young age of twenty-seven only added to her renown in her native city.

Sirani learned to paint in the workshop of her father, a local artist, Gian Andrea (1610-1670), where she studied the style of Guido Reni, the most influential seventeenth century Bolognese painter. Early in her career, she opened her own studio and a school for women painters, an avant-garde institution in this period, thus earning enough money to support her family and allow her father crippled by arthritis to retire. Many anecdotes of her life and career have been noted by Count Carlo Cesare Malvasia, biographer of Bolognese artists and a family friend. Malvasia reports that the present painting was purchased by Count Annibale Ranuzzi. The close relationship between Count Ranuzzi and his father-in-law Marchese Ferdinando Cospi, who acted as agents for the Sirani family, played an important role in introducing the work of Elisabetta to a wide circle of admirers.

Malvasia also published a list of Sirani's works, which she herself compiled as proof against contemporary forgeries. In the ten years during which she worked, about 190 pieces are recorded, the great majority executed for private patrons. Several stories noted in Malvasia's chronicle testify to her rapid working procedures, such as the account of the visit of Cosimo of Tuscany in 1664. After the Crown Prince watched her work on a portrait of his uncle Prince Leopold, he ordered a Madonna for himself, which she executed quickly so that it could dry and be taken home with him. These and other bravura performances made her studio internationally famous.

Sirani's sudden death in the summer of 1665 has never been satisfactorily explained-both poisoning and ulcers have been suggested as causes for her demise. The entire city of Bologna went into mourning and arranged a magnificent funeral, at which the oration was delivered by the Prior of the Lawyers of the university. As a final tribute, she was buried next to Guido Reni.

By the time she died, Sirani's work already revealed an impressive knowledge of the major Renaissance styles current in centers outside Bologna. Her drawings, etchings, and paintings of religious themes and unusual mythological subjects indicate that she was also familiar with the Bible, lives of the saints, and Greek and Roman mythology, subjects considered necessary elements of the education of a contemporary artist.

The present work painted the year before she died is an example of her mature style, the scene is sweet and intimate and full of playful joy, wholly in keeping with the spirit of the times. Sirani's technique is quite accomplished¸ and she has effectively used a limited palette of different tones of white, red, and golds to enliven the scene.

Sirani's striking talent and fresh approach to old themes made her works sought after and highly praised by her contemporaries. Even in her short lifetime, Elisabetta Sirani developed an individual style that stands out in the context of seventeenth century Bolognese art.