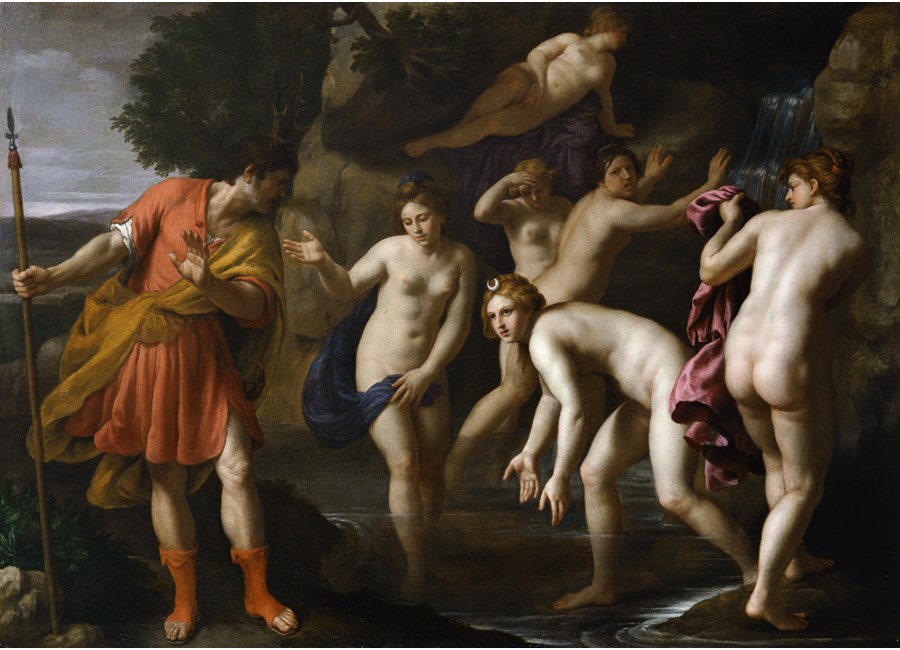 Alessandro Turchi, also known as Alessandro Veronese, was called l'Orbetto because he had helped guid his father who had becoming blind. Recorded in 1597 as a member of Felice Brusasorzi's studio, Alessandro worked in an idiom that reflected Veronese painting traditions. In Brusasorzi he found a master working in a late mannerist style, and in his early work Turchi adhered to his master’s teachings, including many figures in his compositions and surrounding them with complex and elaborate backgrounds. By 1603, Turchi was already working as independent painter in Verona, and when Brusasorci died in 1605, Turchi and another former pupil, Paschal Ottino, complete a series of their deceased master's canvases. The following year Turchi was chosen to decorate the organ shutters of the Accademia Filarmonica, one of the city's most prestigious institutions. He soon became a member of Verona’s cultural élite and successor to Brusasorzi. During these early years he may have traveled to Mantua and Venice, for a Venetian color sense and drama seemed to have infused his more mature works.

Around 1614 Turchi moved to the great artistic center of Italy, Rome, where he would live for the remainder of his life. In Rome he immediately won numerous commissions from churches to paint large altarpieces, many of which remain in situ, for example his painting of the Holy Family with God the Father in San Lorenzo in Lucina. Clearly an established master when he went to Rome, he participated in one of the great decorative projects of the time and supplied an impressive oval panel as part of the decoration of the Sala Regia in the Palazzo del Quirinale (1616-17). In 1616 Cardinal Scipione Borghese paid Alessandro for frescoes in the Casino del Barco at the Villa Pinciana (now destroyed) and acquired some works by Turchi painted on slate the following year. As a member of the Accademia di San Luca from 1618, Turchi took an active interest in the running of the institution, and, with the sponsorship of Cardinal Francesco Barberini, in 1637 became Principe or director. The following year he joined the prestigious Pontifical Accademia dei Virtuosi of the Pantheon.

Although often viewed as one of the followers of Caravaggio in Rome, an assumption his frequent choice of dark shadowy background effects make plausible, Turchi in fact exercised considerable independence in his choice of sources and influences. The present work reveals a surprisingly strong classicising tendency. The dark background and smooth and careful modeling of the figures in the present work reveal his ability to stylistically unite a caravaggesque chiaroscuro with a colorful palette and classicizing figural style, which were inspired by Annibale Carracci and Domenichino. The delicate, sfumato modeling of drapery and flesh as well as the elegant surface of works such as the Diana and Actaeon earned Turchi great acclaim. Such effects give paintings such as the Diana and Actaeon a graceful elegance of unparalleled beauty, and allowed him to reveal in such mythological scenes the mild eroticism that so appealed to private collectors.

In his Metamorphoses, book III, Ovid relates the story of Actaeon, the son of King
Cadmus, who while hunting deer in the mountains chose to stop the day’s hunt and wander through a tranquil valley of cypresses and pines, sacred to the huntress Queen, Diana. Unbeknownst to him, there was a cave at the edge of this valley where a fountain burst from the stones and was surrounded by a beautiful grassy bank where Diana herself liked to bathe in the sparkling water and refresh herself after the hunt. One fateful day Actaeon, who had wandered away from his companions, uncovered the site and surprised Diana while she bathed, at once embarrassing and enraging the goddess. Amidst the turmoil and screaming of her nymphs, Diana thought of attack, but her bow and arrows were out of reach. Instead in revenge she splashed the intruder’s face with water and immediately a pair of branching stag’s horns grew out of his head, his neck grew in length, his ears became pointed and large, his arms turned into long legs and his body grew a hide covering. Fear now replaced boldness, and Actaeon ran away attempting to scream but was unable to utter any human sound. His frenzied retreat ultimately attracted the attention of his own pack of hounds, who, urged on by his fellow huntsmen, attacked him and tore him to bits. Ironically, throughout the onslaught his companions called out for their leader, Actaeon, to join in the sport. With this horrific and ironic death the anger of Diana was appeased.

Turchi’s refined and elegant paintings were sought after by the great collectors of his time and beyond. His paintings were found in the collections of great nobles and Roman clergy of the highest level. Paintings by Turchi were part of the great Barbarini and Borghese collections, and among those who owned works by him were Cardinal Richelieu, Cardinal Mazzarino, King Louis XIV, William III of Orange, Louis Phelipaux de Vrilliere, the secretary of state of Louis XIII and Louis XIV, Grand Prince Ferdinand of Tuscany, the English consul to Venice, Joseph Smith, Frederick Augustus III, King of Poland and Elector of Saxony, and Lucien Bonapart.