"View of Rome: The Piazza del Campidoglio and the Cordonata" 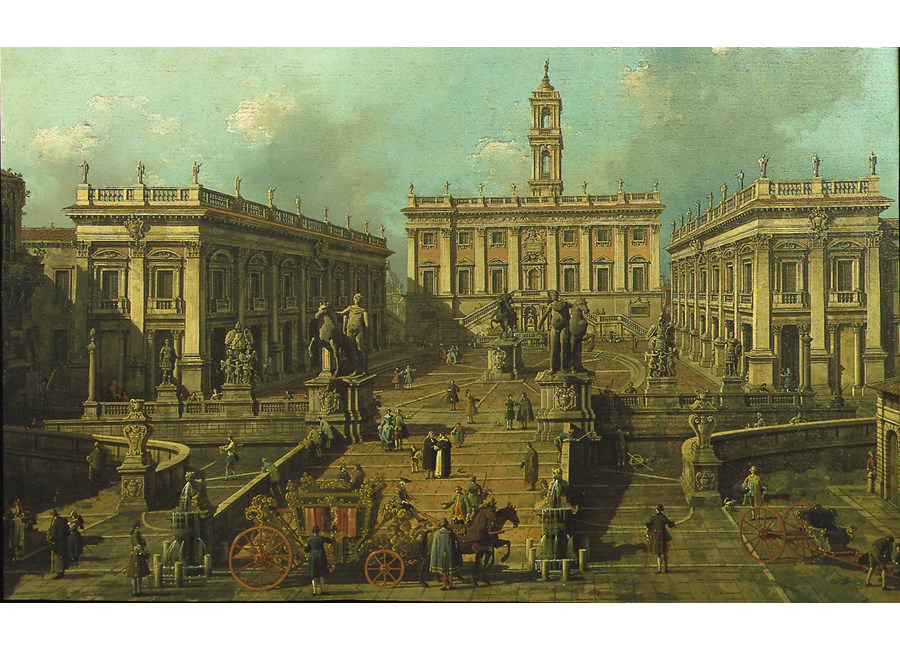 Giovanni Antonio Canal, known as Canaletto was the greatest view painter in Italy during the 18th century and is best known for his views of Venice. These views or vedute were never mere recreations of reality, but always included fanciful or imaginary aspects combined with topographically accurate elements. Such works by Canaletto were enormously successful and his vedute were especially treasured by English visitors who passed through the city on their "Grand Tour" of the great cities of Europe. Canaletto's success among English patrons was helped greatly by his association with the British connoisseur, Joseph Smith, whose own collection of Canaletto's work was sold to King George III in 1762. So strong was the artist's link with the English that, in 1746, at the age of forty-nine, he went to England primarily to find new patrons and inspiration. Carrying letters of introduction from Consul Smith, Canaletto was introduced to the Duke of Richmond and other notable patrons. He stayed in England until 1755, leaving only for a brief visit to Venice in 1750/51. During his stay, he produced about forty paintings of English subjects, but continued to paint Italian views based on his own drawings, prints by other artists, and his own memory.

Canaletto's View of the Campidoglio and the Cordonata in Rome is one such work presumably painted during his stay in England. The viewpoint is raised slightly, showing the Cordonata or the ramp rise gradually to the Piazza del Campidoglio. The Cordonata is flanked at the bottom by two Egyptian lions, the originals of which are now in the Capitoline Museum, the building seen at the right in the painting. At the left are steps to Sta. Maria d'Aracoeli and on the right the Via delle Tre Pile. At the top of the ramp are a series of statues relating to the civic foundations of the city of Rome -- the statues of the founders of Rome, Castor and Pollux with their horses, and statues of the Emperor Constantine and his son. Seen at the ends of the balustrade are two colonne militari or Roman mile markers from the Via Appia. At the center of the Piazza is the equestrian statue of Marcus Aurelius. The building at the left is the Palazzo Nuovo, on the right is the Palazzo dei Conservatori, and in the distance is the Palazzo Senatorio, with its tower. A major element in the painting is the large coach drawn by two horses seen in the foreground moving to the right. The paint is handled with an expressive and sure touch, and Canaletto's lively calligraphic brushstrokes are beautifully preserved, retaining nearly all their original impasto.

Canaletto's working method is based on drawings, which were often preserved for decades in his studio. He was a prolific draughtsman, and the large number of sheets that survive is probably a mere fraction of those executed. He would also on occasion base paintings on his own etchings and, indeed, works by other artists if the need arose. The return of Bernardo Bellotto from Rome in 1743 inspired in Canaletto such an enthusiasm for producing views of that city that it was long presumed that he had accompanied his nephew there. In fact, he had not seen Rome since his youth (1719-20) and was thus obliged to work from drawings he had made then (a number of which are in the British Museum), from views by Bellotto, and from engravings by other artists. In this case the composition is clearly derived from an engraving by Alessandro Specchi published in 1692, from which the coach and the imaginary ramp on the left are repeated. Only one other depiction by Canaletto of the Campidoglio is known, a much smaller picture painted for Thomas Hollis in London in 1755 and last seen at Christie's, London, December 8, 1989. While there are variations in the viewpoint and the figures between the two paintings, stylistic similarities suggest that our picture is probably of similar date.

The Neave Family of Dagnam Park, Essex, owned an important group of paintings by Canaletto,
its other components being a pair of views of Rome, and three pairs of views of Venice. The only other un-paired picture was a Venetian capriccio, long considered a view of Palazzo
Barberini, Rome, which is the same size as our painting and may have hung as its pendant. They also owned a pair of Canaletto school views of Venice. Although Constable states that "the group of paintings belonging to Sir Arundell Neave ... were acquired by his forebears in the early nineteenth century,” there seems no reason to doubt the family tradition that they were acquired by Sir Richard Neave, 1st Bt. (1731-1814). The Venetian capriccio, one of the pairs of Venetian views, and the three views of Rome were probably painted during the artist's period in England, while the other two autograph pairs of Venetian views date from after his return to Venice. Thus, while there is no record that he visited Italy, it seems likely that Sir Richard Neave was introduced to Canaletto while the artist was in England, commissioning six paintings from him there and ordering four more to be delivered after the artist had returned home.

"View of Rome: The Piazza del Campidoglio and the Cordonata"