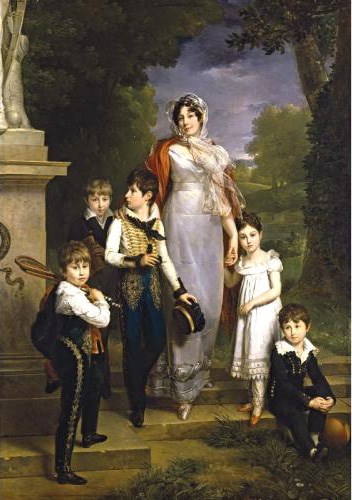 The Duchess of Montebello (1782-1856) commissioned Baron Gérard to paint this important family portrait in 1814. It has remained with members of the family until recently. At the age of 44 Gérard was at the height of his powers and was one of the most sought after and highly honored portrait painters of the age. He had already painted a large military portrait of her husband in 1809 (private collection).

Louise-Antoinette-Scholastique Guéhéneuc was born into an aristocratic family of Breton origin. At the age of 18 she met the young and popular General de Division, Jean Lannes, already famous for his extraordinary heroism on the battlefield, and one of Napoleon’s favorite officers. They married, encouraged by Napoleon, a few months later. Louise-Scholastique was a loving and devoted wife, following her husband to some of his foreign postings. Lannes was wounded on May 22nd 1809 at the battle of Essling and died on May 31st. In 1810 Marechal Lannes was given a state funeral and buried in the Pantheon.

After her husband’s death, the Maréchale Lannes continued to play an important role at the imperial court. After Napoleon’s remarriage to Marie-Louise, she was chosen for her irreproachable morality and virtue to become lady-in-waiting to the new Empress. She developed a true friendship with the Empress and they continued their correspondence even after the fall of the Empire. About 1814, the year this painting was commissioned, the Duchess of Montebello began to withdraw from public and lead a quiet life, devoted to her children.

Gérard suggests the continued presence of the Maréchal Lannes in his painting, as it is dominated on the left by his monumental statue, of which we see only part of a leg and the sword. The cannon ball next to his foot refers to the manner in which Lannes died. Only his eldest son, who succeeded to the dukedom, looks up.

The painting depicts the family of the Maréchal Lannes in the garden of Maisons, their vast estate near Paris. Mother and children form a pyramid, dominated by the protecting Duchess, who wears a fashionable white silk dress, with her shoulders draped with a gilt-fringed red shawl. Her five children surround her. The eldest son, Louis-Napoléon, 2nd Duke of Montebello (1801-1874), is shown standing next to his mother who rests her right hand on his shoulder. He wears a military costume and a black scarf, reminding us that he is mourning his father. In his left hand he holds a ducal hat. Napoleon and Joséphine’s godson, he was to become ambassador during the reign of Louis-Philippe: to Copenhagen 1832-34; Stockholm 1834-35; Bern 1835-38; and Naples 1838-47. He became Minister of Foreign Affairs in 1839 and Minister of the Navy in 1847. During the Second Empire he was ambassador in Saint Petersburg where he had an important role in strengthening relations between France and Russia. Next to him is Alfred, Count of Montebello (1802-1861). He became Deputy of the Gers region. The third brother, Ernest, Baron of Montebello (1803-1882), who wears a military costume, holds two rackets. The fourth son, Gustave-Olivier, Baron of Montebello (1804-1875) sits on the left side of his mother with a ball next to him. The only son of the maréchal Lannes to make his entire career in the army, he participated in the conquest of Algeria in 1830. He was Général de Division, aide-de-camp and Chambellan of Napoleon III and was decorated with the Grand-Croix of the Legion of Honour in 1864. Holding her mother’s hand is the youngest child and only daughter, Joséphine-Louise (1806-1889). She married Hippolyte Boissel, Baron de Monville in 1823.

The Portrait of The Duchess of Montebello and her Children dramatically demonstrates Gérard’s great talent as a portrait painter. His rare technical virtuosity, great sensitivity and deep psychological insights made him the most able painter of his age to render the tender affection that united this mother and her children in a most touching manner. He also was careful to display the great wealth and social prestige of the sitters in a painting that, though monumental and impressive, is full of life and has none of the qualities of a stiff and lifeless “official” portrait. The sitters are shown in lively attitudes, either moving up or down the garden steps, and the children have their toys with them. A great admirer of feminine beauty and grace, Gérard took obvious pleasure in painting the Duchess and her charming children, with their fresh faces and youthful charms.

The painting’s original support was canvas, but the Duchess of Montebello’s eldest son, Louis-Napoléon, had it laid down on panel in 1863. A small autograph replica by Gérard is preserved in the Musée National du Château de Versailles, and copies were executed from 1850 to 1860 for each of the children