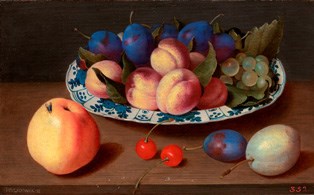 There are few documents known concerning the life of Jacob van Hulsdonck, the Flemish artist who painted this beautiful still-life of a blue and white porcelain bowl filled with fruit placed at the center of a plain wooden table. Although he was born in Antwerp, Hulsdonck was raised in Middelburg, the southwestern Dutch town where Ambrosius Bosschaert the Elder (1573-1621) and his circle pioneered the genre of pure still-life painting in Holland. Because his work clearly shows a strong influence of Bosschaert, it is assumed that Hulsdonck had trained in his studio. By 1608 Hulsdonck was back in Antwerp and was registered in the Guild of St. Luke as a master painter. He married the following year and moved into the house where he kept a prosperous studio, painting a limited range of still-life subjects (fruit, flowers, and banquets) for the next 38 years until his death. From 1613 to 1623, four apprentices trained with him: Jacob le Moort, Hans van Pelt, Thomas Vermeulen, and Gilliam ven Schoodt. His son Gillis (c. 1625 – 1669) also became a still-life painter of note.

Throughout the forty years of his professional painting career, Hulsdonck remained loyal to Bosschaert’s subjects and meticulous style, though fruit became a favorite motif and he developed a distinctive compositional style. Hulsdonck usually allowed a single, centrally placed basket or bowl of fruit to dominate his strongly symmetrical designs, as it does in the present work. At times he added a small vase of flowers to his paintings, but even then he would line up fruit, leaves, nuts and insects close to the edge of the table. Despite his long career, Hulsdonck’s known oeuvre numbers fewer than 100 works, as his meticulous technique would have severely limited the number of works he could produce. Only one dated picture is known, a 1614 banquet piece in the Bowes Museum, Barnard Castle, England. And, while he limited the compositional elements in his work, his style did evolve over time, allowing a basic chronology to be established.

In his earliest still-lifes of the 1610s and 1620s, the vantage point used was extremely high, with tabletops tilted up in order to fully show every piece of fruit, nut, or other object displayed in the decorative bowls and plates. In these early works he used strong tonal contrasts between a bright foreground and a dark background, in order to add emphasis to the objects displayed. In later works from about 1630 to 1647 the scene is viewed from a somewhat lower position, with the bowls and dishes foreshortened and revealing less of their contents. Hulsdonck tends to lighten the background and color in these later works as well. He begins to infuse these works with a greater sense three dimensional space and adds a new rhythmic sense, reflecting perhaps the work of another great still-life painter in Antwerp, Frans Snyders.

The beautiful gem like color, dark background, and lower table edge nearing the bottom of the present panel all point to its being a relatively early work. However, the vantage point is not as high as seen in his Bowes Museum painting of 1614 or as low as in his late work. Therefore a date of circa 1620-25 seems most likely.

In his restrained spare paintings, Hulsdonck focuses on the interplay of vivid color and varied textures. In a technique often seen in his work, Hulsdonck here contrasts the soft yellow skins of apricots with the polished hazy deep blue of the smoother plums. He further reveals his astounding illusionistic skills in the realistic depiction of the dew drops on the very edge of the table and the fly resting on the yellow apple or quince.

When the present painting was published by Bergström in his important book on Dutch still-life painting in 1947 (see Literature above), it was in the collection of Mrs. Lillian Henkel Haass (1879-1961), of Detroit Michigan. She and her banker husband, Julius H. Haass (1856-1931), were early supporters of the Detroit Institute of Art, during William R. Valentiner’s directorship (1925-1945). Before his tenure at Detroit, Valentiner had worked with the great cataloguer, Cornelis Hofstede de Groot, in The Hague, and as assistant to Dr. Wilhelm Bode, the director general of the Prussian State Art Collection in Berlin. His great familiarity with European private collections was instrumental in his ability to convince the Haasses to purchase Jacob van Ruisdael’s brilliant “Jewish Cemetery” for the museum’s collection in 1926, as well as other important works. After the death of her husband, Lillian Haass continued collecting for herself and donating to the museum. It is most likely that Lillian Haass purchased this painting by Hulsdonck in Europe circa 1934 with the advice of Valentiner.