“The Flagellation of Christ” 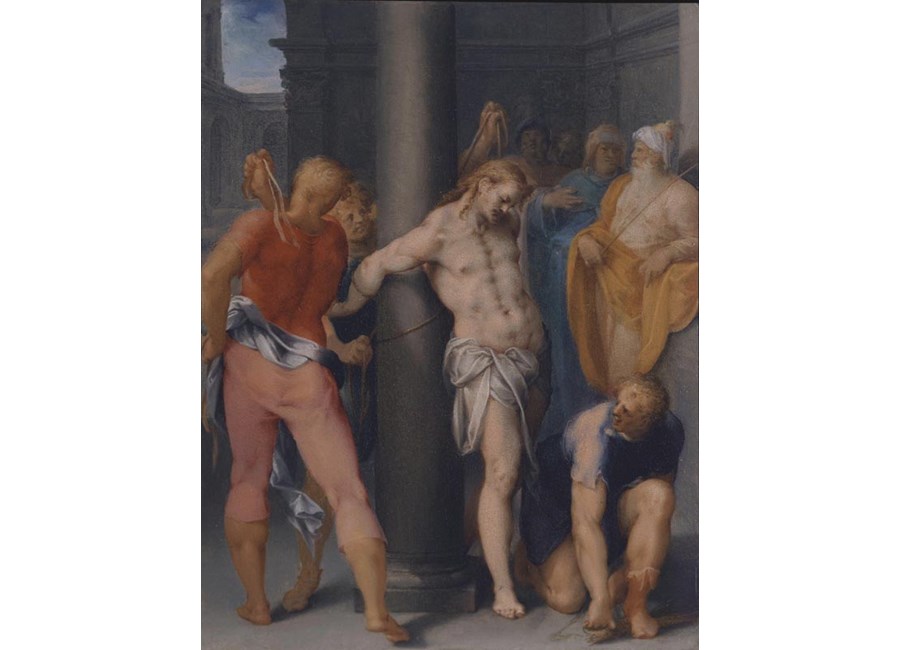 Dated by Dr. Thomas DaCosta Kaufmann to 1575-80, when Spranger was in Vienna and was working for the Emperor Maximilian II and after his death for his son, Emperor Rudolf II.

Bartholomaeus Spranger was a painter of landscapes, portraits, allegorical and mythological scenes, and according to contemporary sources, still-life, genre and even kitchen scenes. He was the son of Joachim Spranger, a wealthy merchant in Antwerp, where he first trained in the workshop of Jan Mandijn, a follower of Hieronymous Bosch. He later was a pupil of the landscape painters Frans Mostaert and Cornelis van Dalem. In addition he studied the refined style of mannerism, copying human figures from engravings after paintings by the mannerist painters Frans Floris and Parmigianino. While still very young, he set out for Italy, passing through Fontainbleau and Lyon. He spent a few months in Paris in the studio of Marc Duval, the painter to the court of the Queen Mother, Jeanne d’Albret, and a pupil of the miniaturist, G. Clovio. He then traveled on to Milan, where he spent the winter of 1565/66 studying fresco painting. He first worked in Parma with Jacopo Bertoia and Bernardino Campi. There he absorbed the lessons of the Emilian tradition of painting by observing the works of Parma’s greatest artists, Correggio and Parmigianino.

By July 1566 Spranger was in Rome, where he first set up a workshop with Michel Jonquoy, a Flemish artist from Tournai. He met Giulio Clovio, who introduced him to Cardinal Farnese, who provided Spranger with lodging in the Palazzo di Cancellaria. In addition to working for Cardinal Farnese in Rome, Spranger assisted Federico Zuccaro in the decoration of the Villa Farnese in Caprarola, where he painted landscape frescoes. Pope Pius V was his patron from 1570-72, appointing him papal painter and giving him quarters in the Vatican. He was also closely associated with the great sculptor Giambologna in Florence. During these years in Rome Spranger is known to have produced paintings and frescoes for many patrons, although most are now known only through literary descriptions and engravings.

In 1575 Giambologna, introduced Spranger and the sculptor Hans Mont to Emperor Maximilian II’s court in Vienna. Both artists spent ten months decorating the Neugebäude in the Fasanengarten near Vienna. Although most of Spranger’s work from this time has been lost or destroyed, the Resurrection of 1576, now in the National Museum, Prague, which was painted for Emperor Maximilian, shows his work of the period was of great significance in that it revealed a truly international Mannerist style that would characterized 16th century art throughout Europe. After Maximilian’s death in 1576, Spranger continued to work for his son and heir, Rudolf II. Records show that he painted three works for Rudolf– a Virgin and an Allegory of Rome, and a Mercury Leading Psyche into Olympus, the locations of all of which are unknown. He collaborated with Mont and Karel van Mander on decorations for the Emperor’s triumphal entry into Vienna in 1577.

In 1580 Spranger traveled to Prague in 1580 where he was appointed court painter. In 1584 he became a member of the order of painters of the city’s Kleinseite district, and Rudolph II made him “Painter by royal appointment”. In 1585 he bought a house in the Kleinseite, and in 1588 the Emperor granted him a coat of arms and a triple gold chain. In 1601 the emperor gave Spranger permission to work at home, since prior to then he had not been permitted to accept private commissions. In 1602 Hans von Aachen became his neighbor and the two artists traveled to Dresden, Cologne, Amsterdam, Haarlem and Antwerp. Spranger died in Prague in 1611.

Spranger’s great contribution was in uniting the more naturalistic or realistic art of the Netherlands with the mannerist style he had absorbed during his stay in Italy and then taking his unique style to the courts of Vienna and Prague. The truly international mannerist style that resulted was both learned and sensual. Bright almost eccentric color harmonies and mannerist compositional style characterize Spranger’s work.

The small copper “Flagellation of Christ”, which Dr. Thomas Da Costa Kaufmann believes to have been painted between 1575 and 1580, while Spranger was working at the court in Vienna for the Emperors Maximilian II and later Rudolph II, reveals Spranger’s style at its best. As can be seen in our small copper, his style was truly international in nature, for he absorbed a great deal from each of the varied artistic experiences he encountered as he traveled from Antwerp through France, to Italy and ultimately to Vienna and Prague. He developed his own unique and very personal style of painting. His use of color was particularly exceptional. The seductive, sensual, and often erotic nature of his work was heightened by his unusual color range, in which he contrasted acid tones with softer half-tones. By choosing extreme color combinations his works were enlivened and made appealing to his sophisticated courtly patrons. His mannered elegant figural style of graceful, softly modeled human forms reveal his debt to Emilian painting. Some of the compositional devices he used, such as his fondness for showing figures from the back derive from the Zuccari. The use of dramatic contrapposto and serpentine figural poses reflect his awareness of the work of Giulio Clovio, the “Michelangelo in Miniature,” as Vasari called him, as well as his firsthand experience with the work of Michelangelo in Rome and Florence. Spranger’s figural groupings which are very often truly sculptural in nature reveal his enormous debt to Giambologna.

“The Flagellation of Christ”