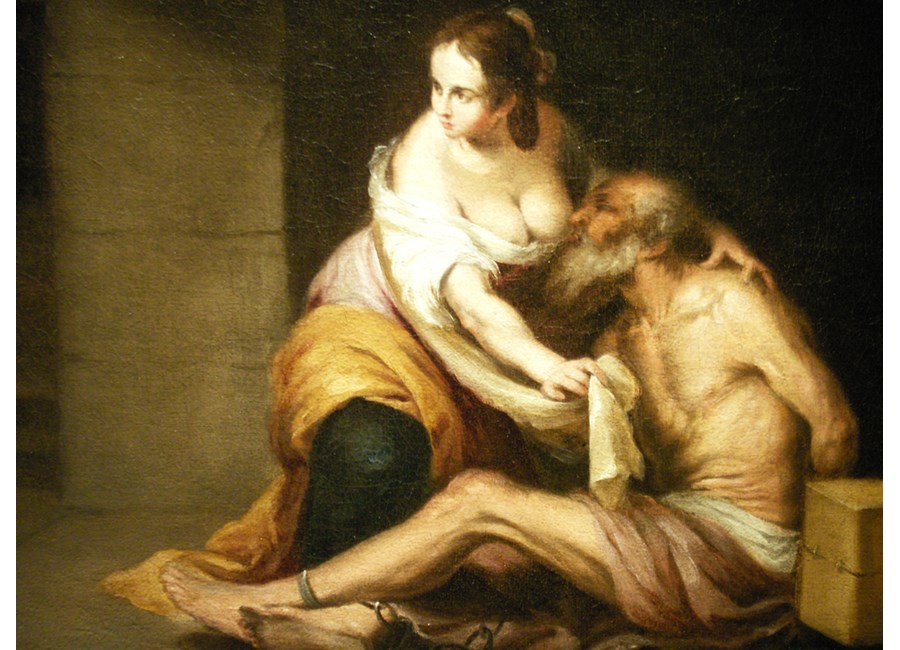 This oil sketch for Murillo’s Caritas Romana, and a related drawing in the Boymans-van Beuningen Museum, are all that remain of a once-famous composition whose picaresque history ended with its destruction by fire at the Philadelphia Academy of Fine Arts in 1845.

A rare classical subject in Murillo’s oeuvre, the theme of Roman Charity is based on the text of Valerius Masimus (Factorum et Dictorum, Book IV, V, 4) which describes how the Roman matron Pero saved the life of her dying father, Cimon, who had been condemned to death by starvation, by giving suckle from her breast. The theme, which was a common subject among the northern followers of Caravaggio, is usually interpreted as an allegory of filial love, but it has been noted that Caravaggio himself included it in his masterpiece The Seven Acts of Mercy (Capodimonte, Naples) as a reference to the charitable act of “feeding the hungry.” It is generally agreed that Murillo based his composition on several engravings after Rubens’s Caritas Romana in the Hermitage, but Enriqueta Harris, while acknowledging this, has astutely observed the differences between the compositions by Rubens and Murillo, and between Murillo’s own preparatory drawing and the finished painting. In the drawing, the matron touches her breast with her right hand, while in the oil sketch and the finished painting she extends her drapery with her right hand, partially covering the nakedness of her father. Thus, Murillo has invoked another of the Seven Acts of Mercy - “clothing the naked”- in giving further Christian resonance to this classical subject.

In 1807 Murillo’s Caritas Romana was in the Madrid collection of Manuel Godoy, Príncipe de la Paz. At the time of Godoy’s overthrow by the French, the painting was sent to the Calcografía Nacional, where it was engraved by Tomás López Enguídanos. In the confusion surrounding the confiscation of the Godoy collection, Enguídanos fled to Valencia with the painting, meaning to save it from the clutches of Joseph Bonaparte, but in a moment of personal desperation he had to sell it, and it eventually found its way into the hands of the Philadelphia merchant and collector, Richard Worsam Meade (1778-1828), who was U.S. Naval Agent in Cadiz between 1806 and 1816. Upon his death, Meade’s collection was bequeathed to the Philadelphia Academy of Fine Arts, where, ironically, the Comte de Survilliers, the erstwhile King Joseph Bonaparte himself, who had settled in exile in Bordentown, New Jersey, had recently lent old master paintings from the sizable collection appropriated during the years of his Spanish reign. The painting remained on view in Philadelphia until the fateful fire of 1845.

An oil sketch for the composition, approximately this size, was recorded in the Spanish royal collection, in the 1794 inventory of the Palace of Aranjuez (see Angulo, cat. no. 2946). The painting is no longer in the collection, however, and no other reference to it exists. Another sketch this size, which Curtis considered an “old copy,” was in the collection of José de Madrazo (no. 396), who had acquired it from the collection of Goya’s friend Ignacio de Iriarte. As Angulo points out, the very important Iriarte collection was already in existence when the Aranjuez inventory was made, making it unlikely that the two paintings were the same. Madrazo was something of a gentleman-dealer who served as a major conduit for the dispersal abroad of major Spanish collections, and it is likely, as Jonathan Brown has assumed, that the present sketch is the one from the Iriarte collection.

The oil sketch played an important role in Murillo’s method of working. The early, exploratory stages of a composition were usually developed with drawings in pen and ink, wash or chalk. Then, in very freely painted, small oil paintings, the artist established the chromatic scheme for the composition and refined its details. Finished works usually bear a close resemblance to the oil sketches in terms of composition, as was certainly the case with Roman Charity, so far as we can tell from Enguídanos’ engraving, the only other record of it that survives. Both the style of the oil sketch and that of the preliminary drawing suggest a date of about 1670.