"Christ and the Samaritan Woman at the Well" 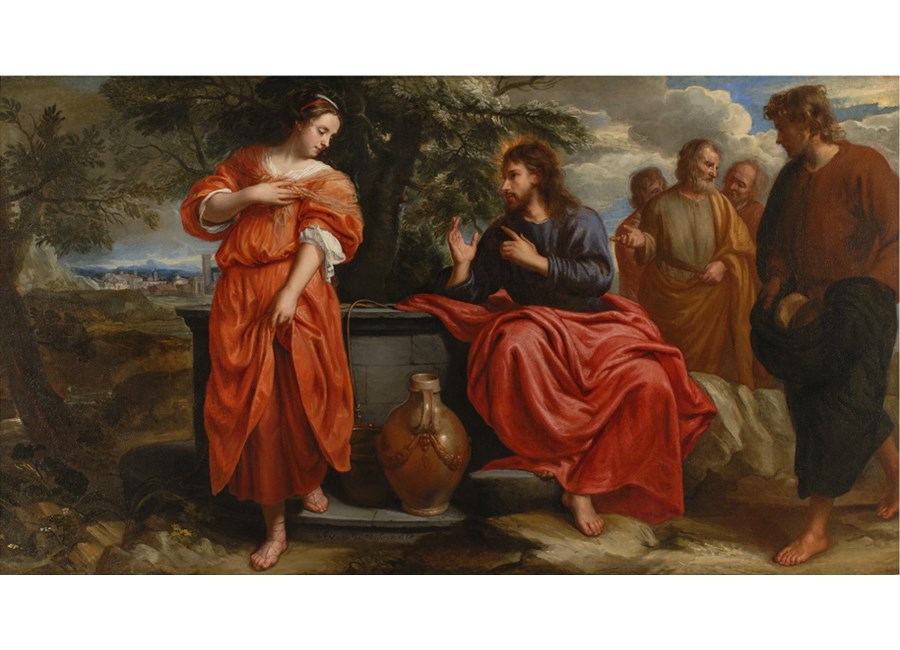 Jacob van Oost the Younger was a painter of religious and historical scenes as well as a fine portraitist. His father and teacher, Jacob I, was the best known artist in Bruges in the 17th century and was profoundly influential in the development of his son’s style. Jacob the elder had been in Italy where he visited Genoa, Florence, Rome, Venice, Bologna, Milane and Naples, and his early work reveals his great debt to Italian Baroque painters such as, Carracci and Caravaggio. However, of greatest influence on his son’s development were his later works, which show his response to the pervasive inspiration coming from the great artists in Antwerp, Rubens and van Dyck.

Like his father, Jacob the Younger traveled to expand his artistic horizons. He lived in Paris for two years before traveling to Rome (c. 1660/65), and returned to live for a short time in Bruges before moving to Paris about 1668. He then settled for good in Lille where he married Marie Bourgeois in 1670 and where he obtained numerous commissions from local churches and cloisters. After his wife’s death in 1697, Jacob continued his attachment to his hometown of Bruges making periodic visits. Between 1659 and 1670 Jacob II frequently worked in collaboration with his father, and their works have often been confused. Increasingly Jacob II was influenced by the great masters in Antwerp, Rubens and van Dyck.

This painting depicts the story of Christ meeting with the woman of Samaria from the Gospel of John (4:1-20), a parable of tolerance. When Christ paused to rest at Jacob's Well, a holy site for both Samaritans and Jews, he requested a drink of water from a Samaritan woman. Though initially surprised, since Jews and Samaritans were traditional enemies, she became increasingly intrigued by the knowledgeable and all-seeing visitor as they talked. Believing him to be a prophet, she spoke of looking forward to the coming of the Messiah. "I am he, the one who is speaking to you," Jesus replied. While the religious authorities of Jesus's day generally denounced and shunned the Samaritans as heretical, he does not reject this woman. Rather, he extends to her and her compatriots the hand of compassion and possible salvation.

In the “Christ and the Samaritan Woman at the Well” van Oost has clearly relied on his study of the works of van Dyck for the postures of the figures and their graceful bearing and gestures. Here in a work that is almost Venetian in its sense of decorum and color, one sees van Oost turn for inspiration to the great Venetians, such as Veronese and Titian.

Jacob van Oost the Younger always sought to convey genuine emotion in his paintings through the facial expressions and gestures of his subjects. The restrained yet sensitive display of emotion in his works show his awareness of similar aspects in the paintings of Federico Barocci and Correggio as well as those of van Dyck. In works like “Christ and the Samaritan Woman at the Well” van Oost reveals his enormous debt to his Italian predecessors and their northern advocates, van Dyck and Rubens.

"Christ and the Samaritan Woman at the Well"