"A flagon of wine, a wine glass, a loaf of bread and knife and pies on a pewter plate." 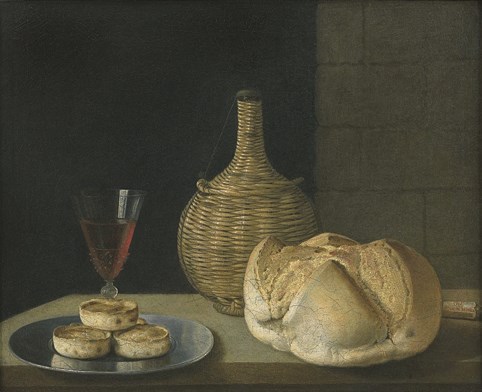 Sebastian Stoskopff was from Alsace and brought up in the independent Protestant republic of Strasbourg. In 1615, after serving his apprenticeship in the studio of the miniaturist and engraver Friedrich Brentel the Elder, he became the pupil of the painter and architect Daniel Soreau (d. 1619) in Hanau, near Frankfurt-am-Main; after Soreau's death he was obliged to finish his master's paintings. He remained in Hanau until 1621 and there came across examples from Flanders and the Netherlands of still-life painting, the genre to which he was to devote himself. In 1621 he went to Paris, remaining there until 1640 apart from a trip in 1629 to Venice, where he met his future biographer, the historian Joachim von Sandrart. Like other Protestant painters he frequented the Saint-Germain-des-Prés district of Paris and came into contact with the still-life painters Lubin Baugin and Jacques Linard. In 1641 he settled in Strasbourg, where he was accepted (re\ccu) as a master. In the work of his maturity, much of it done for his patron, Graf Johann von Nassau-Idstein, Stoskopff began to
employ more overtly moralizing themes, with little pretence at the narrative element found in his Paris paintings.

Stoskopff's paintings fall into two types: those done in Paris, which are more clearly influenced by the French school; and the later works, where the German aspect of his artistic background reasserts itself. The present painting clearly falls into the first group, and is clearly linked both in content and spirit with Lubin Baugin's Dessert with wafer-rolls, datable to circa 1630-5, in the Musée du Louvre, Paris M. Faré, Le grand siècle de la Nature Morte en France. Le XIIe siècle, Fribourg/Paris, 1974, p. 114, illustrated. In what is arguably his most famous still life, Baugin reduces a poor man's frugal meal to the elements of the Eucharist. Both paintings reveal a dark wall and bare surroundings that force the eye to focus on the simple objects in the foreground: a wineglass, a pewter plate of pies, a knife and a loaf of bread. Again, in both paintings the edge of the pewter plate overlaps the table ledge, projecting into our space and thus giving the paintings greater spatial depth. These everyday objects are not merely beautiful to look at, the artists have imbued them with a transcendent significance.

A remarkably similar version of the present composition on panel, essentially rearranged without the plate of pies is illustrated in B.Hahn-Woernle, Sebastian Stoskopff, Stuttgart, 1996, pp. 144-5, no. 19, Birgit Hahn-Woernle dates that painting to circa 1630, and concurs with a similar date for the present into our space, in the present painting the knife is almost hidden behind the fabulous Melendez-like bread roll, and it is the plate of pies that invades our space. These works, whether they are meant to remind us of the Eucharist or not, are bathed in soft golden light and surely rank among Stoskopff's most successful and sensitively observed still lifes.

We are grateful to Dr. Birgit Hahn-Woernle for confirming the attribution to Stoskopff and the date of circa 1630.

"A flagon of wine, a wine glass, a loaf of bread and knife and pies on a pewter plate."